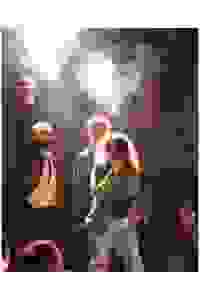 Disgusted by the Vietnam War and the government's repression of those seeking equality domestically, a handful of leaders from the '60s student movement seized control of Students for a Democratic Society and reshaped it in the name of overthrowing the United States government. Believing violence to be the only means to transform American politics and society, these passionate idealists accelerated a movement to a revolutionary fervor, but left a country behind. The Assembly revives its 2011 production with the same cast.

See it if you care about artivism and appreciate the provocative writing, great ensemble acting, unusual staging, and political content.

Don't see it if you have no patience for long works and devised theatre and no interest in the misguided revolutionaries. Read more

See it if you're open to historical, original dramas that don't follow any formula

Don't see it if you jump with loud noises, like yelling, of which there is a lot Read more

"Enthralling ensemble show...The show is worthy of its lofty accolades, but its electric charge doesn't stem from its accurate accounting of history...Rather, the six-piece character study brings the inner workings of the extremist group home to the audience...Though the Assembly clearly came to admire the group as they researched, they push beyond simply valorizing them, and seem content, mostly, to explore inwards, considering what drives a person to extreme, violent action."
Read more

“Far from dry or didactic, there’s humor, charm, brittleness, and heartache throughout. Director Chayes keeps an intensely human focus...The talented ensemble enhance this staged intimacy with their complex characters and deeply felt performances...As the group begins to splinter, the visual language of the show becomes more symbolic and less literal...That creates some beautiful tableaux but with a run time of two and a half hours it’s here things begin to drag a little."
Read more

"An ardent exploration of the inside workings and motivations of the revolutionary Weather Underground...The Assembly makes us see, feel, and understand how the youth of America was swept away by the rising tide of collective action and commitment to change…A superb cast delivers the impassioned rhetoric and distinctive characterizations of the figures with full-out fervor and specificity…You will be enlightened, entertained, and maybe even motivated by this stellar work.”
Read more

"The Assembly presents a difficult tale with ease, engaging and personally involving the audience...'Home/Sick' can be heavy, but importantly never presents an unbearable load. It is not without humor, irony, and self-awareness...Refreshing to see. Important but neither didactic nor polemic, it is first and foremost a well-made piece of art that allows every viewer to have their own experience of and reaction to a valuable presentation of our flaws, as people and as a society."
Read more

"A dynamic and thorough piece of devised theater...For the most part, everyone in the ensemble manages to stay grounded, despite the heady content of their heedless ideologies...'Home/Sick’s' only shortcoming mirrors the very flaws of the Weather Underground: its ideology became too big, too idealistic, and too unwieldy...Overall, 'Home/Sick' is a thought-provoking and timely look back at a moment of controversial revolution."
Read more

"The entire cast was a unit, not one weak link. Their passion was so clear and appreciated by the audience...The story told was very interesting and dynamic, it had many great ideas! But in that, there were at times too many ideas. The play was very focused on the timeline of events, so the development of the characters suffered...The show is very long and there are places that could be buttoned-up a bit...'Home/Sick' is highly recommended even in its flaws, it is too relatable not to see."
Read more

"Jess Chayes’s intense and thoughtful direction guides the audience through two decades of the group’s history…The performances — especially Edward Bauer as a conflicted bomb maker and Ben Beckley as a narcissistic socialist — are sharp and committed. The play’s only major missteps occur when the actors break character and deliver monologues about their own experiences with social injustice...'Home/sick’ won’t leave you laughing, but it certainly will leave you thinking."
Read more