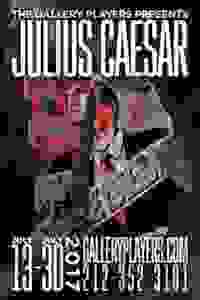 The Gallery Players present a streamlined staging of Shakespeare's story of ambition, duty, and political intrigue, which plays out in 16 scenes that use every corner of the troupe's Park Slope venue.

In 'Julius Caesar,' we see how easy it is for well-intentioned patriots to let disagreement slip into bloody civil war. War hero Julius Caesar is welcomed back to Rome. But fear of the citizens' devotion to Caesar pushes many of his closest friends to wonder how far will he go with such populist support. After his fateful assassination on the Ides of March, how will the populace react?

Don't see it if you hate Shakespeare or good theater.

See it if Great use of space. Stunningly 'choreographed'. Disturbingly upsetting. Riveting.