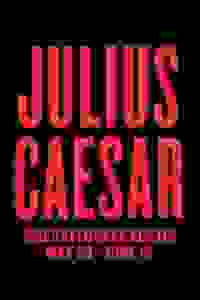 The Public Theater’s artistic director, Oskar Eustis, helms the Bard's play of politics and power, last seen at the Delacorte 17 years ago. Part of Shakespeare in the Park's free summer season.

Rome’s leader, Julius Caesar, given a Trumpian makeover, is a force unlike any the city has seen. Magnetic, populist, irreverent, he seems bent on absolute power. A small band of patriots, devoted to the country’s democratic traditions, must decide how to oppose him. Shakespeare’s political masterpiece has never felt more contemporary.

See it if You usually have a hard time with Shakespeare, the contemporary setting of this helps to make it more clear and understandable-and relevant!

Don't see it if If you hate Shakespeare. As good as this is, it's still two plus hours of a play you'll probably hate, wondering what they're talking about.

See it if You enjoy well made Shakespeare even if you don't like the subject matter. I saw this before all the hype blew it out of proportion.

Don't see it if This is not my favorite Shakespeare play. It just isn't, and no matter how good the production was, I'm just never going to love this play.

See it if A terrific new take on a classic. Having Antony played by Elizabeth Marvel was a genius stroke.

Don't see it if Those who complain about this show are missing the point. Its message is staunchly anti-violence. If you're stupid, you won't get it. Read more

62
This was ruined for me by a shrill, southern accented female marc antony

See it if Gregg Henry and Nikki James were wonderful. You want to see more of Trump. Cell phones and Shakespeare are not an oxymoron to you.

Don't see it if You dont like modernized, smirky, gender blind casting. You want an intermission in 2 1/4 hours. Boring sets, noninformative costumes.

See it if you like Shakespeare that is contextualized in modern day to provide contemporary relevance. Committed performances by great cast.

Don't see it if Shakespeare plays are too slow for you, you're a Trump supporter who inaccurately believes this production is glorifying assassination

See it if you're interested in the whole debate about artistic expression and censorship.

Don't see it if you'd be offended at the depiction of Trump being killed. Read more

Don't see it if want to see something lighthearted or are trying to escape the every day realities of todays political issues.

See it if you want to see what the fuss is about.

Don't see it if you are not down with the Shakespeare in the Park experience. Read more

"The first half...is great, nasty fun, even if it’s preaching to the choir. To the extent there is a problem with the Trumpification of 'Julius Caesar'...it arises in the second half...It is then that we are faced with the ways that Trump and Caesar never properly scanned, and an aftermath in which that confusion breeds more confusion...To be fair, this is a problem built into the play...The fault is not in the stars, as good a group as the Public has assembled in the park in years."
Read more

"The play is not an endorsement of violence; it’s a cautionary tale about its risks...Although the cast delivers Shakespeare’s verse with remarkable lucidity, the characters are secondary; the focus of this production is on political, not personal, tragedy, and it offers a dark vision of the rise of authoritarianism. Yes, the repeated allusions to Trump elicit giggles of recognition at first. But when the smoke clears two hours later, nobody is laughing."
Read more

"We get the idea immediately, and since it doesn’t go anywhere particularly interesting after that we just as quickly lose interest. Its would-be provocative central conceit notwithstanding, this is a bland, unevenly acted production of Shakespeare’s play whose main virtues are its fast pace and vigorous energy...Further illustrating the production’s lack of subtlety is David Rockwell’s ugly-as-sin set design...A production whose aesthetic gears are grinding too noisily and predictably."
Read more

"This staging is far less interested in exploring the psychology of Caesar (or Trump) than it is in examining the inner workings of democracy...Bringing these complicated themes to the public for free is a worthwhile cause...Although the Public’s version isn’t perfect, it’s a worthy attempt to bring Shakespeare’s most deeply democratic work into the present, with a lively, contemplative production."
Read more

"In most Shakespeare productions in the park, mob scenes have to be taken on faith, with the same handful of actors scurrying about trying to look like legions. But this surging Roman mob has real numbers, and its fickle allegiances to one demagogic political figure after another makes it genuinely frightening...The Trump analogy doesn’t hold up once Caesar is assassinated...The instigators of violence are exceptionally well cast and forcefully played."
Read more

“In this production, the real tyrant is not Caesar, but its director, Oskar Eustis. He more clearly comes across as ambitious, inconsistent, with little regard for limits, manipulating his audience by playing to popular taste...But what about Shakespeare?…He was exploring the evolving tensions between populism and patrician heritage...Such themes don’t fit easily with Eustis’ grade-school notions. But they are far more intriguing than the tyrannical vision he crudely enforces in their place.”
Read more

"Shakespeare scored contemporary political points by cloaking them in historical allegories. Eustis demands no such imaginative leap...The production is meant to provoke...A very good production whose singular drawback is that it makes no sense...Even given its rough satirical edge, the pleasures and the faults of this production lie not in the stars but in ourselves: It’s a staging for this age, if not the ages."
Read more

"Without a doubt worth your time—and not because the allusions to contemporary politics, though compelling, are particularly seditious, or groundbreaking...What feels first-rate here is not so much these editorial-cartoon interludes as the potent handling of the drama’s tragic dimension...The outstanding Stoll and Thompson contribute mightily to the sense of this as one of the best-spoken and liveliest 'Julius Caesars' in recent memory...Best of all is Marvel who lives up to her surname."
Read more