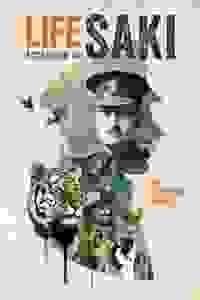 View in admin
Life According to Saki
NYC: East Village
83
Score it Scored!

Life According to Saki NYC Reviews and Tickets

Inspired by the life of early-20th-century British satirist Hector Hugh Munro, this debut play from children's author Katherine Rundell makes its US premiere after winning the Top Award at the Edinburgh Festival Fringe.

1916. In the trenches of the Battle of the Somme, a soldier tells stories. That soldier is Munro, under the pen name Saki. Beginning with early misrule and school-age rebellion, his tales move on to the complexities of adulthood: obsessions and games, charm and chaos, friendship and jealousy, and, finally, death. Munro was over the age of conscription when WWI broke out in 1914, but volunteered to fight. He was killed by a sniper two years later. His witty, absurd, and strangely optimistic stories are brought to life by an ensemble cast and the occasional puppet.

Don't see it if small production. Not lavish. You don't care for separate stories framed by an overall theme. You prefer high drama.

See it if You like historical stories told through a creative lens. The actors do a great job at playing various characters throughout the play.

Don't see it if You dislike smaller productions or actors playing multiple roles.

See it if Staged version of several of Saki's short stories. Sad because his lively imagination was snuffed out by the war.

Don't see it if I didn't find the stories compelling. They're cute. The small theater was hot and stuffy. I became sleepy.

See it if You like your plays with equal measures of humor, satire & inspiration. You like clever interpretations of classic writing.

Don't see it if You don't like social satire. You prefer more traditional interpretations of classic writing. You dislike puppetry & video projection.

See it if short stories translated to the stage, well scrubbed young talent, Edinborough Fringe transfers, SAKI, or puppetry are your thing

Don't see it if WWI memorabilia, British authors, trench warfare, WARHORSE, are not your thing

See it if you're tired of dysfunctional families and the f-bomb in plays; this is charming story telling with some puppetry wrapped in a clever settin

Don't see it if you enjoy high drama; angst filled situations; over blown sets. This show has none of that - just wit and charm.

See it if You want to have a little fun! You enjoy ensemble casts playing multiple parts. This was funny and smart and a pleasant way to spend a night

Don't see it if You really wanted a look at Saki's life. This is more a story of HIS stories. You don't like vignette stories and want to see more of Saki.

See it if you like good acting, clever staging but do not require any depth to the piece.

Don't see it if You want a true feel for the pungency HH Munro. Read more

"It’s perfectly enjoyable as a whimsy-splashed showcase for fresh-faced talent. But the distinctive perversity of the author it riffs upon ultimately eludes the talented creators...Under the direction of Jessica Lazar, the rendering of his stories...brings out their most accessibly theatrical elements...Ms. Rundell has made a few adjustments...Saki’s figures of speech are occasionally tweaked for contemporary ears, not necessarily for the better."
Read more

"The stories resist being dramatized. Many of them are remarkably brief...Under the direction of Jessica Lazar, the company is adept at popping in and out of various characters. There are a few felicitous staging moments...But in general, 'Life According to Saki' works its framing device rather too relentlessly...You may find yourself leaving the theatre further strengthened in the conviction that Saki's humor is best enjoyed on the page."
Read more

"While 'Life According to Saki' is laden with too many riches for one evening, it is a very diverting show with its eccentric and unconventional stories which retain their relevance after all these years. Saki's off-beat humor still seems extremely modern."
Read more

"Playwright Katherine Rundell has a deft touch for coalescing the stories of Saki with the life of Saki...Rundell is aided by the brilliant director Lazar, whose guidance has helped to create a seamlessly connected ensemble with choreographer Addison. Evoking aspects of children’s theater, the cast effortlessly embodies different characters by switching use of a wardrobe piece or prop...Those that love independent theater will be regretful indeed to miss out on this fine production."
Read more

"There’s plenty to admire: imaginative directing, spirited acting, a mesmerizing Bunraku puppet, an anachronistic dig at our new president and moments of wit and pathos...'Saki' is an evening of moments, unable to sustain itself...'Saki' simply overestimates both the framing device and the power these short stories have when translated to the stage...The stories about life back home in England are meant to contrast with the life in the trenches but that is never fully developed."
Read more

"The production’s success sits squarely on the backs of the hard-working performers, who transfer between roles with ease and keep the production consistently delightful to watch...Make no mistake–this is an entertaining show, with constant humor and a lightheartedness that puts a cheery face on horrifying events...If we must be exposed to the darkness in the world–and we must–'Life According to Saki' reminds us to find the light."
Read more

"It's the show's overall inventiveness rather than its contents that make a visit most worth one's while...'Life According to Saki,' which runs only little more than an hour, is best appreciated as a brief introduction to Saki's writings. Still, the stories seem now only of passing interest, they're far from hilarious, and they possess little dramatic weight; in short, there simply isn't enough here worthy of rediscovery."
Read more

"Directed with energetic precision by Jessica Lazar...The talented members of the Atticist troupe (this is its impressive debut production) artfully operate furry and feathered puppets...When not puppeteering, the actors easily take on and cast off gender-swapping roles as they dart from story to story...The whole thing is so very English in both content and style that it may not be every American’s cup of Darjeeling. But this American enjoyed it quite a lot."
Read more