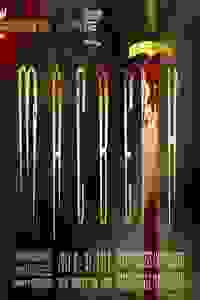 Framed to reflect the diverse culture and interests of CTH's neighborhood and audience, this interpretation of 'Macbeth' is set in Ethiopia during the time of Haile Selassie (Ethiopia‘s regent from 1916 to 1930 and Emperor of Ethiopia from 1930 to 1974). It stars CTH's producing artistic director, Obie-winning actor Ty Jones, and Rosalyn Ruff, who played Macbeth and his wife a decade ago in a previous company incarnation of the show.

See it if You love Shakespeare with a difference.

Don't see it if You only like classically staged Shakespeare, or you don't like Shakespeare at all.

See it if You'd enjoy a highly talented group of actors putting a modern spin on a Shakespeare classic. Fun, family friendly and entertaining.

Don't see it if You do not enjoy outdoor theater or if you do not like the works of Shakespeare.

See it if you want an outdoor Shakespeare experience this summer that's super-accessible, from the venue to the great acting. Nothing "hard" about it!

Don't see it if You just dislike Shakespeare. But if you're just up to see a good play well done, go for it. High energy, captivating.

See it if you enjoy dance-infused productions, want a night of theater outside without having to sit on the ground, & want to see a great Lady Macbeth

See it if great music, set, and effects on large stage in outdoor setting. Active and compelling production with fine acting; never a dull moment.

Don't see it if you don't like Shakespeare dramas and/or outdoor productions in public parks. Otherwise, go.

Don't see it if you don't like old scripture.

Don't see it if You dislike interpetive Shakespeare

See it if If you already know the play.

Don't see it if If you love Shakespeare go Read more

"The noise and the night are factors whenever 'Macbeth' is performed outdoors in an urban setting, but somehow they’re particularly effective enhancements here. They help this production survive some uneven stretches and a general sense of rushing through the material...Ty Jones, the theater company’s artistic director and a commanding stage presence, tackles the title role...Jason Delane as Macduff makes its most heart-wrenching moment very effective indeed."
Read more

"Set in 20th-century Ethiopia, this one-act truncation speeds by. Familiarity with the story helps though all of the celebrated soliloquies are there, with Ruff’s climactic sleepwalking speech and Jones’s spirit-fueled breakdown particularly effective. There are quibbles: The porter cracks obvious Trump jokes and the weird sisters are visually eerie yet vocally garbled. But like the best campfire ghost stories, this multicultural 'Macbeth' delivers goose bumps."
Read more

“There's plenty of sweep in Cofield's staging...For all its speed and spectacle, this production goes a long way toward illuminating the shifting relationship between Macbeth and his too-ambitious wife...This was my first experience with this company, and clearly its members are not afraid to provide a classic play with a boldly stylized profile while remaining fundamentally true to the text.”
Read more