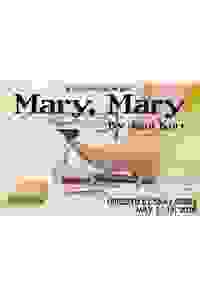 Retro Productions kicks off its 2019 season with one of the longest running Broadway comedies of the 1960’s, about a divorced couple who are reunited, in the hopes that they can avert an audit by the IRS.

Mary is a compulsively wise-cracking magazine editor who uses her sense of humor to shield her insecurities, while Bob is an infuriatingly sensible publisher. Their marriage ended in divorce and they haven't seen each other in 9 months, but now Mary has been called back to Bob's apartment by their mutual friend and lawyer, Oscar. Throw in Bob's young fiancée Tiffany; his old war buddy, the handsome and single film hero whose star is in decline, Dirk Winston; and one major snow storm--and we begin to wonder, will Mary and Bob recognize that they are soul mates in time to get back together before they each end up in the arms of another?

See it if you enjoy witty discussions between men and women. These characters express their feelings with intelligent dialogue.

Don't see it if you don't like a lot of discussion of marital problems between ex's. The views of early 1960's affects the dialogue. Read more

See it if you want to relive the early 1960's and think it was an interesting time culturally.

Don't see it if you were hoping for an interesting production of a very very dated play. Read more

Don't see it if Your time would be better spent seeing the movie [which is not that good either but I remember from my childhood] or any Doris Day comedy.

See it if you enjoy a good old fashion rom com, revivals & beautiful design elements with a first rate cast.

Don't see it if you aren't into theatre from the past or revivals. Read more

See it if you are in the mood for a light, very funny retro show with a fabulous cast, great design, and a look into what 1961 was like for women.

Don't see it if you have no ability to understand that it was written in 1961, and it was a different time, and you need to take it from where it comes. Read more

See it if You want a light and funny evening at the theater and an escape from today!

Don't see it if You don't have a sense of humor, don't like rom-coms, don't have an appreciation for the past. Read more

See it if You're interested in seeing a throwback to the rom-coms of the 50s.it's definitely of its time and has a place in theater history

Don't see it if The Miscasting of the leading lady is going to bother you .it was very distracting and through the whole thing off kilter

See it if you love throwback period comedies, the kind they don't make anymore. The acting and directing are top notch, and design is great.

Don't see it if you hate witty wordplay, romantic comedies and farce

"A window on the 1960's, the problem for younger people will be the number of household names that aren't well-known anymore like Elizabeth Arden, Jack Warner, Louella Parsons, and David Susskind, pioneers who should not have been forgotten. The show program conveniently has a Pop Culture Glossary in the back...The problem for older people is that the pacing is a bit slow where it should be played at farce tempo which would make the repartee all that much more scintillating."
Read more

"This Xennial derived pleasure from the silver-haired audience filling the majority of the seats...I enjoyed their laughter and nostalgia, made obvious by their knowing sighs during those intimate moments best understood by couples who have been together long enough to finish each other's sentences...While the first act lags at times, the second act is laden with energy and physical comedy...Sometimes it's nice to see a revival that doesn't try to put a modern lens on old themes."
Read more

"Yet for all the funny lines in this romantic comedy, this production of 'Mary, Mary' garners few laughs. It isn’t that the actors aren’t trying; more adept direction would have guided them toward better comic timing and tighter humorous synapses. Furthermore, 'Mary, Mary' is by no means the best in its 'rom com' class...Kudos to the cast for giving it their best go, and to Retro Productions for their charitable fundraising efforts and for keeping classic American theater alive."
Read more

"On Broadway in its prime, the play was revolutionary, charming, and witty...Attempting to resuscitate this dated work now, Retro’s 'Mary' seems quaint at best, and unbearably dull at worst. The laugh factor alone has seriously dropped...Director Shay Gines and the cast fail to pump any needed energy into the material, leaving a trail of wan half-chuckles and displaying a puzzling lack of chemistry....Unfortunately this piece hasn’t aged well with modern sentiments of class and gender."
Read more