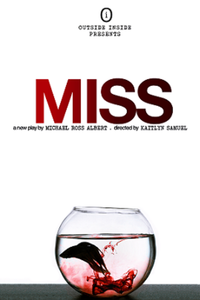 Part of FringeNYC: A shocking accident at a private boarding school irrevocably changes the lives of a teacher, her fiancé, and a troubled student. A taut and explosive new drama about violent misdemeanors, professional misconduct, and missing the love you'll never get back.

Categories: Drama, Local. From Outside Inside. Written by Michael Ross Albert. Directed by Kaitlyn Samuel.

FROM THE ARTIST:
Outside Inside is proud to present the world premiere of Miss by Michael Ross Albert.

Presented as part of The New York International Fringe Festival, Miss explores the tenuous connection between a high school teacher, her fiancé, and a troubled student. After a shocking accident irrevocably changes their lives, these three damaged souls are forced together to try and mend their broken relationships. The result is a tense three-character, hour-long drama about loss, grief, guilt, and revenge.

The world premiere production will be helmed by FringeNYC regulars, Outside Inside. Founded in 2011 by graduates of the Actors Studio Drama School, Outside Inside has produced four plays in FringeNYC to date, including the near-sold out run of The Grass is Greenest at the Houston Astrodome in 2014.

Directed by Outside Inside’s founding co-artistic director Kaitlyn Samuel, Miss features an impressive cast of some of the most exciting up-and-coming performers in New York City.

With a stellar cast led by a stalwart team of “FringeNYC veterans,” and an intense, provocative script, Miss promises to be a unforgettable world premiere and a must-see production in The New York International Fringe Festival.

See it if Your not afraid of having your mind and emotions challenged. Where everything you "see" doesn't really exist.

Don't see it if If you don't have any desire to feel squeamish and/or deal with perverse abuse.

See it if you're interested in secret relationships and long wordy arguments, and about the struggle to be a high school teacher.

Don't see it if you care a lot about good staging or are irritated by too long shows. The last 20 minutes should have been cut for a stronger impact.

See it if Very solid story and execution, some unexpected psychological twists, good to great acting for a change

See it if you want to see three actors sink their teeth into complex, troubled characters. It's a showcase for some strong performances.

Don't see it if oh boy. I won't spoil the big reveal, but after you realize exactly what the story is, you'll be uncomfortable having paid to see it.

See it if You want to see fantastic moment to moment acting.

Don't see it if You have extremely calcified opinions on what an appropriate romantic relationship is.

See it if see it if you like dark, edgy , well acted drama

See it if you want to see a play about flawed characters who struggle with bad decision making.

Don't see it if you dislike a cliched, predictable story that should have cut a lot of the fat. I give it a C grade.

See it if you like shows that delve into challenging and uncomfortable subject matter.

Don't see it if you are expecting to come away with a deeper understanding of the characters' behavior. The treatment is too surface to truly enlighten.

"Samuel chooses to have the trio mostly stand and talk, giving Albert’s text the spotlight it deserves. Perhaps more activity would add to the tension between the characters and to the naturalism this production is going for...A shocking ending that takes place after an already unnerving twist had me wishing Albert didn’t feed the need to give me the explosion I was expecting...The story of three people who have fallen in their own personal ditches and have no energy or faith left to climb out."
Read more

"The playwright tells us way more than we need to know about way too many details, and in some cases way too many times. The play is saved by the agile direction of Kaitlyn Samuel, and the especially fine performances by all three actors. O'Brien is shackled with the largest share of the extraneous and redundant, but nonetheless manages to confront this broad range of circumstances effectively, without becoming a caricature in any of them."
Read more

"Director Samuel moves the action of 'Miss' at a reasonably even pace and supports her cast as they peel away the layers of dissemblance and desperation. It is the peeling of those layers that gives 'Miss' its strength. Too often, however, the characters get involved in implausible situations, but the denouement is worth the wait despite some bumps in the dramatic arc. Albert’s characters are well-defined and their conflicts clear. The resulting plot is interesting and thought-provoking."
Read more