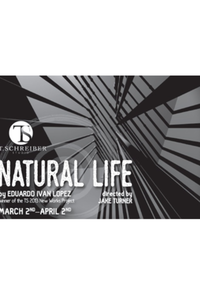 Inspired by real events, Eduardo Ivan Lopez's play explores the relationship between a female murderer on death row and the reporter who covers her story.

Inspired by a real-life incident in the 1980s, 'Natural Life' explores the relationship between death row inmate Claire and TV reporter Rita. Rita's objectivity is challenged when she discovers the mitigating circumstances that drove Claire to commit her crimes, including abuse, forced prostitution, alcoholism, violence, and desperate but ill-fated attempts at redemption. In Rita's effort to "set the record straight," she bonds with her subject.

Don't see it if just want to dance and sing

See it if You'd enjoy a condensed troubled life of a woman bringing in ethics of the death penalty, extenuating circumstances & honouring wish to die.

Don't see it if graphic violence and subject matter are too disturbing. This isn't a happy ride, but it's well worth taking.

See it if You want amazing acting in an intimate setting. Schreiber studio is tiny with big productions, better than Broadway and far cheaper.

Don't see it if You'd rather spend $150 on not so good productions on Broadway!

See it if looking for a powerful and relevant drama. It's a beautifully written true story that deserves to be recognized.

Don't see it if looking for a more light-hearted fare. This play has a lot of substance but there is graphic material that may make people uncomfortable.

See it if You have a soul. This play touched me in a way only a couple plays ever have. I was sobbing at the end of it. So real and so tragic.

Don't see it if You are looking for a lighthearted show.

"Holly Heiser is committed and convincing…Fractured as it is, the story is easy to follow and moves along. The only perceptible drag is the need for frequent scene changes…Even so, Heiser manages to sustain interest....Whatever the facts of this particular case, there’s a deeper truth involving pervasive misogyny and exploitation that 'Natural Life' pulls up into the light."
Read more

"Acclaimed playwright Eduardo Ivan Lopez has molded a true paragon of the contemporary American drama...Via a script so realistic it veers on the model of a documentary, director Jake Turner contrasts hauntingly naturalistic action with surrealist, lurid staging...Heiser's supreme vulnerability and ability to balance the intelligent, articulate, and likable side of a criminal establishes an instant connection with the audience...Do yourself a favor and check out 'Natural Life.' It’s that good."
Read more

"The show features excellent performances throughout the small cast...The play’s topic is heavy, but director Jake Turner has made sure to keep the pace moving and the interest up throughout. With his great set, terrific casting and well thought out visual distractions, he has made what could be a sleeper into an edge-of-your-seat show."
Read more

"Eduardo Ivan Lopez’s play starts off stilted, but ends up creating characters and themes that make us want to question...Heiser’s portrayal is strong, unflinching and powerful. By the time the play ends we know exactly who this woman is and we feel her pain...Jake Turner’s direction is almost cinematic...It wasn’t until we got to the prison and the meetings between Claire and Rita that the show came alive. Once that happened the flashback became powerful and we were drawn in."
Read more

"Compelling characters and complex questions about crime and punishment are at the heart of playwright Lopez’s latest play...Turner’s skilled direction keeps the action moving swiftly and clearly...'Natural Life' is thought-provoking and commanding. The subject matter is timely, and fans of recent pop-culture phenomena such as 'Making a Murderer', 'Serial' and 'The Newsroom' are likely to be riveted by this exploration of the justice system, the prison system, guilt and the media."
Read more