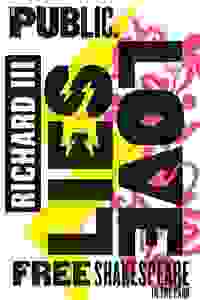 Richard, determined to win the throne, manipulates, kidnaps, and murders all who stand between him and the crown. This brilliant dive into the grey areas between political masterminds and violent power grabbers opens Free Shakespeare in the Park’s historic 60th Season.

Directed by Tony Award nominee Robert O’Hara (Slave Play, The Public’s Barbecue), the show follows one of Shakespeare’s most devious villains giving into his lust for power.

See it if you want to see a mostly traditional Shakespeare and you know who the characters are supposed to be and their back history. Solid acting

Don't see it if You expect something vibrant and a point of entry to understand an important story.

See it if You want to see a standard Shakespeare production and you want to have the experience of going to Shakespeare in the Park. The cast is good.

Don't see it if You want to see an innovative or modernized version of Shakespeare. This is pretty standard.

See it if You’re a fan of Shakespeare or The Public, both are on prime display here with a fresh Richard that is so very inclusive & breathtaking.

Don't see it if You can’t take your Shakespeare how The Public dishes it out…FOR THE PEOPLE…there’s a little something for everyone here. As it should be! Read more

See it if you enjoy stories of betrayal, murder, and power—and don’t mind Elizabethan English.

Don't see it if Shakespeare isn’t your thing. As is typical with many of his plays, there are many characters and a convoluted plot. Read more

See it if you love Shakespeare and/or Danai Gurira, both of whom deliver here.

Don't see it if you don’t like Shakespeare plays performed amazingly.

See it if love Shakespeare's history plays, want to see a great performance by Gurira, love just being at any outdoor performance even a 3 hour one

Don't see it if want excellent acting all around (the performance of Queen Margaret also excellent). As noted by many others the sign language parts just* Read more

See it if like The Public's take it or leave it approach to tradition. Not every casting pick agreed w/ me, but overall brisk, entertaining, popular.

Don't see it if you can't sit still for this long in the Delacorte. Read more

"These coherently interpreted characters do not add up to a coherent interpretation of the play, which wobbles between shouty polemics and a kind of Tudor snark."
Read more

"It’s certainly a funny tragedy, full of snide asides from the sociopath at its center, but it’s about as breezy as a tornado. The English duke Richard, through trickery and force, rolls like a juggernaut through his own family, murdering right and left, just to reach the crown....Robert O’Hara’s production has ideas — but it is not rich in those other things, and it lets our focus waver."
Read more

"The play concludes with order restored and the agent of chaos removed; the audience stumbles into the night, the spell of Gurira’s charisma and Richard’s ambition broken, wondering what it is that Shakespeare’s England, and we, just lived through."
Read more

"Happily for audiences, if not for the many characters who fall victim to his machinations like ninepins, Richard is onstage almost all the time. Ms. Gurira’s performance makes a memorable case for the benefits of nontraditional casting."
Read more

"The young Prince of Wales and Duke of York wear glitter sneakers. Those shiny shoes exemplify the primary problem of this production: So much is going on, yet so little is going on."
Read more

"when Richard steps out into the audience and explains away his wrongdoings, we listen, enraptured, and applaud on cue. It's the most clever bit of staging in this nearly 3-hour production, which doesn't shed much new light on the 600-year-old play, but is well designed and provides a worthy talent showcase for its actors."
Read more

"Admittedly, not all these disparate-sounding choices add up, and those of us searching for the why in O'Hara's staging will probably come up empty-handed. But I found this 'Richard III' properly thrilling. My kingdom for more nights like that."
Read more

We've had some great productions of Richard III in recent years, along with some really terrible ones, but none have been as conflicted as Robert O'Hara's staging at the Delacorte. It's a mass of warring impulses, both high-concept and deeply conventional, eager to make a statement but lacking anything meaningful to say. A handful of strong supporting performers do their best to keep this rudderless ship on course, but nobody should have to work that hard, not on a warm summer's night in Central Park.
Read more