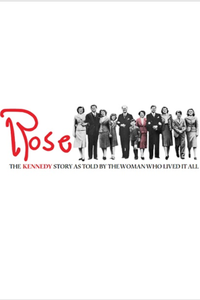 Nora's Playhouse presents the Kennedy story as a one woman show, told through the eyes of the matriarch, Rose Kennedy.

'Rose' is set in 1969 at the Kennedy’s Hyannis Port compound the week after Teddy’s fateful accident at Chappaquiddick. Rose Kennedy struggles with all the tragedies the Kennedys have overcome and finds new understanding of the choices she made, as well as those made by her husband and children. Inspired by audio recordings Rose Kennedy made, this one-character drama takes the audience on a fascinating and unexpected journey.

See it if Chalfont, a remarkable actor, brings Rose Kennedy to life. It is a well researched play and was happy to become well acquainted with Rose.

Don't see it if You know all you need to know about the Kennedy clan.

Don't see it if you want riveting theatre and fall asleep easily. There is nothing new here.

See it if You are fascinated with the Kennedy family or if you want to see Rose's perspective.

Don't see it if You don't want to see one person only.

"Ms. Chalfant is enchanting — isn’t she always? — working her typical magic in a white pantsuit, pearls and a 1960s bouffant. Her work is hampered, though, by a play that tries to say way too much...This is a ladylike drama, in keeping with its subject’s public persona...Ms. Klepikov and Lianne Arnold’s projection design could have seriously enhanced the production...But at the Clurman, projected between pretty floral window-treatment panels, they’re sometimes difficult to see."
Read more

"One could not ask for a better interpreter of this complex role than the brilliant Kathleen Chalfant. Clad in an Arnold Scaasi–esque pantsuit by Jane Greenwood, she exudes her signature fiery intelligence. Rose’s thwarted drive is all there, kept in check by constant hand-­wringing—­a gesture not of guilt but of determination to maintain decorum at all costs."
Read more

"In Kathleen Chalfant, the production has an actress who is superbly skilled at probing the unspoken emotions tucked away behind Rose's iron-willed great-lady façade…Surely the director, Caroline Reddick Lawson, had much to do with sculpting such a tactful, understated, and ultimately devastating performance...In the end, 'Rose' is a remarkable portrait of a woman who played the hand she was dealt without ever looking back."
Read more

"It's rarely a riveting evening, and anyone with merely a passing familiarity of the Kennedys will find few genuine surprises in it. But it unveils enough seldom-aired complexities to at least stay interesting. The production could be sharper...Chalfant's portrayal is articulate and measured, but pointed, every line reading, head turn, and blink choreographed to allow Rose to maintain the appearances that drive her."
Read more

"Leamer’s text has the ring of truth but one wonders if Rose Kennedy would have revealed so much to a group of visiting strangers....Under the direction of Caroline Reddick Lawson, Chalfant is always commanding and interesting to listen to...'Rose' has a certain number of flaws which a bit of rewriting and reshaping could put on a better footing."
Read more

"Director Caroline Reddick Lawson guides Chalfant with a stern grip and a keen eye on nuance. Together, their collaboration is strong, creating an interesting character study of this American icon. The design team is without flaw...Relying entirely on Ms. Chalfant’s exquisite capacity for subtlety and nuance, Leamer's script is unfortunately mostly a textbook of Kennedy history and family trivia...As a whole, if not for the fantastic performance, the play is without a basic dramatic drive."
Read more

"Caroline Reddick Lawson directed with a fine sense of the ebb and flow of this century-wide tale. Of course, Ms. Chalfant was charismatic, as usual, and molded what was clearly merely a documentary in the guise of a play into a fascinating character study. 'Rose' has a shockingly limited run. If you want to see the brilliant Ms. Chalfant at the top of her form, and get a refresher course in the colorful Kennedys, run to the Clurman Theatre immediately."
Read more

"Chalfant can only do so much under the overly cautious direction of Caroline Reddick Lawson. What she does do, however, is a class act. It's just too bad that our visit with Rose has all the dramatic punch of a lecture on underwater basket weaving. Even with the help of projected slides and photos (mostly too faded to see clearly) our interest wanes pretty quickly."
Read more