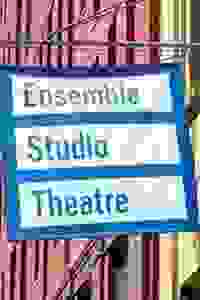 2017 Marathon of One-Act Plays: Series A NYC Reviews and Tickets

'Showtime Blues' by France-Luce Benson, directed by Steve H. Broadnax III: A potentially dangerous encounter and major train delays force Ameira and Darius to confront their internalized prejudice, and the harsh realities of life as a moving target.

'El Grande' by Maggie Bofill, directed by Pam Berlin: When Adriana locks herself in the bathroom, declaring she will now be living there, her two sisters Yolanda and Antonia have to get her out.

'Blue Handed' by David Zellnik, directed by John Giampietro: As a soldier testifies about an atrocity committed against an Arab civilian, his interrogator wrestles with a deeply buried memory of childhood shame.

'The Fork' by Emily Chadick Weiss, directed by Andrew Grosso: Joyce, a proud grandma and leader in her field, is about to retire and feels she should use this time to assassinate the President.

'How My Grandparents Fell in Love' by Cary Gitter, directed by Colette Robert: In 1933, Charlie, a Polish Jew who has immigrated to America, returns to the Old Country in search of a wife.

See it if you want an entertaining evening of theater in an intimate setting, fine acting and unique stories.

Don't see it if you need a long linear plot and fancy scenery. Each of these short pieces was unique and wonderful in its own way. Read more

"'The Fork' deftly shades boisterous humor with political alarm and awareness of mortality...France-Luce Benson’s 'Showtime Blues,' has more mixed success...David Zellnik’s 'Blue Handed' is the most poetic piece...But the director, John Giampietro, can make no sense of it, and it comes across as lifeless...Mr. Gitter’s 'How My Grandparents Fell in Love' is a gorgeous high note to end on...Uproarious and beautifully cast, with tone-perfect direction by Colette Robert."
Read more

"The biggest value in New York City theater right now...It just goes to show that when the core is solid–the writing, acting and directing–you don’t need huge budgets and fancy effects to make a play work. 'Showtime Blues,' the first one-act of the evening, is a perfect example...The final one-act of the evening, 'How My Grandparents Fell In Love,' was the perfect ending to a wonderful evening...The audience went crazy cheering and clapping."
Read more