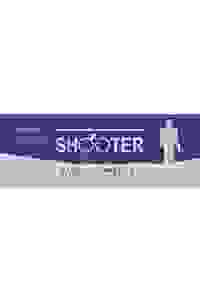 This world premiere drama tells the story of a shooting massacre stopped before it can happen, and explores the relationship of gun violence to the male identity.

When Jim sees a teenage boy with two shotguns beneath his trench coat nearing the entrance of the local high school, he pulls his own firearm and stops a potential massacre. Jim is a hero. But as more details on the incident are uncovered, what really happened becomes a lot less clear. 'Shooter' is a human tale focusing on the fallout between three friends, each of whom may have contributed some way to the would-be shooting.

See it if You think you know how you feel about the gun debate-this might help you see things from another way-no matter which side you start from.

Don't see it if You don’t want to listen to any opinions but your own.

See it if you like a story,/ debate on gun violence. creepy character's that touches on a resonant debate in todays culture.

Don't see it if Show was all over the place, needs to be reworked if it wants to go farther. Author throws a lot at you, very little meet on the bone howeve

See it if you are willing to listen and observe the issue from both sides while watching good actors immerse you in the timely topic.

Don't see it if you want a lush production. This is bare bones. Contains some loud moments and the use of fake guns that may disturb some.

See it if you're interested in dramatic responses to the ongoing crisis of gun violence in the US.

Don't see it if spending an evening with 4 creepy guys & 1 cipher is not your idea of fun. Read more

See it if you want to try to learn WHY? The production makes one think and wisely does not cram it down your throat

Don't see it if It can be upsetting for those who may be directly involved with the violence today..

See it if Its focus on a topic that people need to face. At times its was hard for me to watch, but the story and the casts pull you in.

Don't see it if This is not up lifting show, but a show that need to be seen.

66
A bit too unrealistic

Don't see it if You have trouble suspending disbelief. The idea of what happened in this play is a bit too far fetched an unrealistic for me Read more

See it if you want a better understanding of why the NRA is so successful. Sheehy, Gnat, and Corbin give particularly good performances.

Don't see it if you want a balanced debate on gun control—this still leans left (although the gun trainer is captivating). Read more

"Half-baked, overacted and with stylized design to the point of distraction...Mr. Graber’s trite scenario is rendered as a superficial by-the-numbers treatment and the presentation is overwrought...Hilbe’s physical positioning of the actors is accomplished and the scenes flow. However, the technical elements are obtrusive and the performances are erratic...Mr. Graber’s preoccupation with sociological concerns hasn’t been matched by a command of playwriting in this leaden exercise."
Read more

"Timely, but unsuccessful...To its credit, the script does not offer easy answers; at the same time, it touches so many themes that the overall effect is dizzying and largely unsatisfying...I don't know what playwright Graber wanted 'Shooter' to convey, or even if he had a clear message...Perhaps most unforgivably, 'Shooter' sidesteps an opportunity to delve into the ways gender roles, sexual assault, male chauvinism, and gun violence intersect."
Read more

"'Shooter' distinguishes itself by being concerned less with guns and more with the people...The play splits itself three ways...Jim's time in the gun course, Jim's relationship to his childhood friends, and Jim's reckoning with what he's done...The play is at its strongest when it concerns itself with the first of these thread...I found myself yearning for a non-male perspective onstage...Limiting the number of perspectives constrains the play...Still, 'Shooter' makes a lot of smart choices."
Read more

"A thoughtful portrayal of an alienated student shooter & a troubled adult...riveting & uncomfortable...strategically aimed at building intensity. Jim was the shooter outside a school that killed an armed student for which Jim is hailed heroic...A female student was also hit in the crossfire. The mounting isolation & rage in Jim's life is palpable...Joyless fanatics find sanctity of being from guns which provide purpose...The messaging hits the target."
Read more

“Perhaps it takes a woman like director Katrin Hilbe to mount this work for maximum effect. It is a play about male bonding…Director Hilbe masterfully weaves dramatic moments together, careful to keep the five actors each in his own character…This riveting drama focuses attention on an issue of crucial importance in our world. It serves one prime purpose of theater, to make comfortable people uncomfortable.”
Read more

"Skillfully written...Ean Sheehy gives a terrific performance as Jim, exposing the character’s journey with focus and clarity...However, both the playwright and the director overdo the intensity...Ms. Hilbe keeps her actors at the peak of intensity throughout the play...It’s great to find Mr. Graber examining the same subject in 'Shooter' for the contemporary audience, and in such an adroit production."
Read more