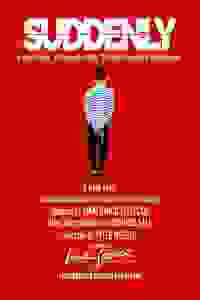 Live Source Theatre Group applies their signature design-heavy production values to this new adaptation of the 1954 film, about an attempted presidential assassination that rocks a quiet town in northern California.

Set against a post-war backdrop but staged with contemporary urgency, this intense political thriller explores a particularly American culture of violence. "Suddenly" will blend its stylized 1950s influences in a contemporary production with integrated video/projection design, highlighting the timeliness of this period script as it explores how far we have (and haven’t) come in the national dialogues on guns, the treatment of veterans, PTSD, and the dark side of the American dream.

See it if You want to see very clever staging of an old film. The play feels a lot like you’re watching an old film, same sense of style and dialogue.

Don't see it if You don’t enjoy old noir films or suspenseful storylines. Some may find it a bit corny but I thought it was perfectly in the style intended.

See it if you like theater used differently; comparing old-fashioned entertainment/aesthetics/norms to today’s to see how national ideals developed

"'Suddenly,' the film, is a smart choice for this sort of exercise, because it presents a naturally tense, suspenseful situation inside a single location...Settecasi's script captures the Hollywood-pulp tone of Richard Sale's screenplay, but there's a slight disconnect between the actors and the artificial words they have been given to say...'Suddenly' isn't a total success, but it is an unusual and arresting experiment; this company is worth keeping in mind."
Read more

"Sale’s well-constructed screenplay sets up a familiar scenario of underworld types invading a commonplace domain...An aesthetically successful presentation with some neat stage pictures and tableaus. However, the deliberate quest for stylization leads to an exaggerated tone in the performances...There’s the sense of experiencing a stilted art project rather than being engrossed by a play...Ultimately, it’s all a mildly entertaining, inconsequential exercise."
Read more