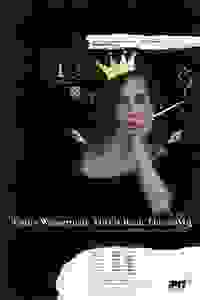 View in admin
Tamra Wasserman: This is Real, This is Me
NYC: Gramercy
69
Score it Scored!

Tamra Wasserman: This is Real, This is Me NYC Reviews and Tickets

In Slingshot Theater Company's world premiere comedy, when a high schooler fails to get cast in her school musical, she sets out to create her own show about her favorite subject: herself.

When Tamra Wasserman fails to get cast in her high school's production of 'Anything Goes,' she realizes that her sensational talents are being maliciously ignored by her fascist theater teacher. Naturally, Tamra decides to take matters into her own hands by writing, directing, producing and starring in the world’s most innovative and important play, 'Tamra Wasserman: This is Real, This is Me (An evocative autobiographical play by Tamra Wasserman)'.  Part autobiographical, part experimental and all unwarranted, Tamra’s life unfolds before our eyes.

See it if You are in the mood for an no frills show that feels like it got thought up & put together during a night of heavy drinking and bong hits.

Don't see it if If you can’t just relax and take it for what it is, someone’s vanity project, & not even very good at that. Some fun moments & good talent.

See it if You enjoy shows such as Noises Off and The Play That Goes Wrong. Alternately if you enjoy Miranda Sings.

Don't see it if You are looking for a comedy that's all levity. This one get's dark, and how. Read more

Don't see it if You're tired of the "backstage drama coming onstage" trope. You want a show with a purpose or a show that's funny.

Don't see it if you want to see only shows with polished writing and performance, musicals or comedies with no dark and violent language, can‘t sit 75 min

See it if you want to see a creative group of performers tell the trials and tribulations of a young girl becoming a young woman who wants to act.

Don't see it if you are looking for a big night out at a theater. as the venue is simple and comfortable , and geared up for a younger crowd. Read more

See it if The idea of watching a precocious teenage girl’s vanity project amuses you, enjoy backstage drama exploding on stage. Funny performances.

Don't see it if Funny teenage angst sounds like a bad night at the theater to you.

See it if you want a light, entertaining and very one-sided interpretation of a young woman's childhood-through-high-school grasping for stardom.

Don't see it if you don't like quirky humor, an improv vibe, lots of screaming and hysteria, low production values and sophomoric situation. Read more

See it if you are interested in actor's life and self-portrait.

Don't see it if you expect a big production or don't like comedies.