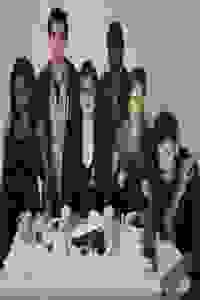 Ten Ways on a Gun NYC Reviews and Tickets

Tommy Freely buys a short-round revolver online in an attempt to feel in control of his life. Once his fiancée finds out about it, he timeshares the gun to his deadbeat friends. This is a play about a play about that gun. Tommy is in love, but out of control. Jessica can't get out of her own way. Becca is broke, Philly is a tool, Teddy has hit a dead end, and Rich Dick is somebody's Dad. No one wants to own a gun in this day and age in a liberal metropolitan area, but most wouldn’t mind having it a couple days out of the year. 'Ten Ways on a Gun' is an exploration of why anyone, anywhere, does what they do.

"Lamb’s 'Ten Ways on a Gun' is never boring. It is a hyper-active darkly comic trip...My biggest gripe is that the show is less diverse than it could be, especially for a production that is otherwise so timely and self-aware. I think that Squeaky Bicycle could have done more to reflect its multicultural community in the casting."
Read more

"The performance is fast paced and moves us between the two stories in an entertaining way, with director Kathryn McConnell reversing time, mixing in musical numbers, and creating room for both sincerity and playfulness. The supporting cast members, who play a number of characters, easily transition from role to role."
Read more

"To truly grasp the story you may need a roadmap to figure out where exactly in space and time you are...With multiple narratives present, Lamb spreads them thin, never really defining certain moments...'Ten Ways on a Gun' is certainly an interesting piece but has the potential to be even stronger. There are strong themes inside the text but they are lost to a first-time viewer."
Read more

"The production is plagued by a few logical flaws around the very idea of timesharing a gun... While a little too caught up in the conceit of a theater company devising a play about the subject matter they are truly addressing, director Kathryn McConnell and Squeaky Bicycle Productions do reveal some important truths about why giving up guns isn't as easy as it seems."
Read more

"The ensemble gels well together – uniformly sharp, comically dark, and at times outrageous, especially during blitzkrieg choreography. Yet due to the level of implausible camp, when the play strives for serious sentiment, insincerity often results…While the piece as a whole endures a scattered focus, Squeaky Bicycle’s collective creativity demonstrates something undeniably bold and ambitious.”
Read more