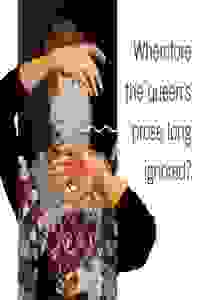 Part of the 2015 Next Wave Festival, Compagnia de' Colombari presents England's greatest queen through her various writings, to reveal the soul and ever-shifting essence of an icon.

In this new American play that explores the life and language of England’s greatest queen, four actresses portray the resilient queen and allow us to marvel at her theatrical brilliance. Multi-lingual and insatiably curious, Elizabeth survived disinheritance, excommunication, and imprisonment to emerge triumphant. Her reign saw the rise of Shakespeare’s theater, but what did she have to say herself? The play uses Elizabeth’s own words to reveal her wit, courage, and extraordinary love of her people. Dissecting the persona of Elizabeth I through Joycean deconstructions of her letters, speeches, poems, and prayers, this production is Elizabethan drama in its most literal sense.

See it if Beautiful production. Not enough expostion. Better if you already know the history.

"This witty, hourlong performance piece was created by Karin Coonrod, a theater artist of far-reaching inventiveness...It deploys what might be called a style that deconstructs to reconstruct…This production provides a surprisingly graspable crash course in Elizabeth I and her times, clearly laying out archival evidence in different picturesque patterns. It’s up to us to assemble the final portrait."
Read more

"Coonrod's setup works, but is uneven....There's a lot of potential with this show. Expanding both the running time and material would not only strengthen this promising piece it would give the audience more of a chance to answer Coonrod's initial question...The show excels in its ability to present almost a case-study of one of history's earliest female leaders. Four gifted actresses bring her alive, but we're left wanting more."
Read more

"Director Karin Coonrod has a strikingly original approach to this complicated subject…The actresses each turn in excellent performances…For me, the switch from Elizabeth’s words to modern slang is sometimes jarring. Because the actresses are essentially reciting, it is hard occasionally to get emotionally involved with Elizabeth…As a tribute to a great queen, 'texts and beheadings/ElizabethR' succeeds superbly.”
Read more

"'Texts&beheadings' is more like portraiture than plot…Smartly, the four representations of the queen could not be any more different in tone, or portrayed by more different performers…It works almost like a Picasso painting, full of attention to perspectives and angles...What it does attempt it does well, and it serves to show how biographical texts can granted life onstage in imaginative and innovative ways."
Read more

“Coonrod’s biggest success in creating this work was her astuteness in combining the modern with the old in order to make something new…However, although the conception of 'texts&beheadings/ElizabethR' was appealing, parts of the performance were disjointed or lacking…Despite the complications in its execution the production captures the depth of Elizabeth’s story in an interesting new light: the fractured light of Coonrod’s kaleidoscope."
Read more

"The lack of a chronology can make the play a bit confusing for those not familiar with the virgin queen…But these moments pass quickly, giving way to some beautiful aural and visual moments, like when the four queens sing in harmony…The four women make their own Elizabeth and enhance it with their own gifts...’Texts&beheadings/ElizabethR’ presents Elizabeth’s words in as many ways as it can to immerse the audience in her life."
Read more

"'Texts & Beheadings/ElizabethR' brings to life this brilliant woman through her personal poems, prayers and private letters…While there are plenty of dark moments in this play it is certainly punctuated with hilarity…If you’re a crazed Elizabethan fan you probably won’t be able to separate your existing love from this play. Someone less familiar with the life and times of Elizabeth might not find the joy in it but it’s definitely something to explore."
Read more