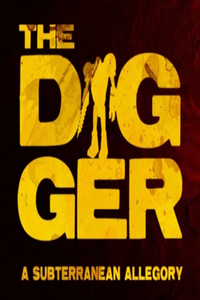 The Digger: A Subterranean Allegory NYC Reviews and Tickets

La MaMa and Inkfish present a story of estrangement and the erosion of humanity in the shadow of technology, told through puppetry, poetry, and song.

Inspired by Dante’s 'Inferno,' the epic of 'Gilgamesh' and Hermes' 'Emerald Tablet,' 'The Digger: A Subterranean Allegory' is a musical satire about mankind's obsession with technology. Part man, part machine, the Digger is a new-world pioneer who strives to find the source of life hidden in an underworld dominated by greed, lust, fraud, and treachery. Facing otherworldly demons as well as inner ones, the Digger searches for meaning and is pushed to transcend his earthly attachments. But will that sacrifice ultimately include the one he loves?

"An ambitious, elaborate production...The company has pulled together too many disparate elements. The robotic puppet has nothing in common visually with the actor or with the shadow puppet representing the man. It’s the focus of 'The Digger,' but whatever statement its robotness is making is lost among the ideas and techniques in this post-modernist pastiche."
Read more