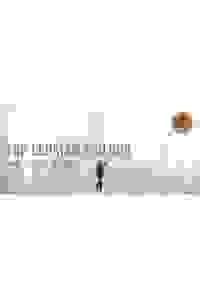 Making its North American premiere, this National Theatre production traces the trajectory of western capitalism by following the fortunes of a single immigrant family. Directed by Sam Mendes.

From the arrival of three brothers from Bavaria to America in search of a new life to the collapse of the firm they established, triggering the largest financial crisis in history, the story of the Lehman Brothers serves as a parable of the shifting definition of the American dream. Simon Russell Beale, Adam Godley, and Ben Miles reprise their portrayals of the Lehman Brothers, their sons, and grandsons spanning nearly two centuries and told in three parts on a single evening.

See it if you're fascinated by immigrant stories. A doozy of Amer rags-to-riches. Avant garde staging. Fast pace. Many chars. Sweep of 150+ years.

Don't see it if you want a point to the 3 1/2 hours; TLB is just stylish storytelling. Or if you dislike men posing as women/yg kids. Or if boxes bore you. Read more

See it if You want to learn about the Lehman Bros history. OK performances of robotic material. Their story is very interesting. The script is not.

See it if You enjoy history & intersted in seeing an informative documentary style show. 90% of the text is narration, not dialog.

Don't see it if You prefer shows that SHOW you a scene rather than TELL you. It feels like an audiobook or reading of a wiki page not a play. Read more

See it if You enjoy masterful storytelling. Phenomenal staging that only serves the story, never upstaging it. Projections and lighting stunning!

Don't see it if It’s long. Three and a half hours but it’s so incredible I wouldn’t let that stop you. This really is a must see. Read more

See it if Very well staged and good acting. The story of the Lehman family. Told mostly in third person and done very creatively.

Don't see it if If you do not want to see a play that is long. Three and a half hours long. A play spoken in third person.

See it if A creatively staged work with riveting performances. Long but engaging. I learned a lot. Lots of NYC history.

Don't see it if You don’t want a 3.5+ hour experience. You aren’t interested in a nonfiction jewish immigrant story, questioning the idea of America.

Don't see it if you cannot climb the 2 flights of stairs to the top of the bleachers or are unable to spend serious money for the lower front seats.

"Genuinely epic production, directed with surging sweep and fine-tooled precision by Sam Mendes...Under the inspired direction of Mendes, with a design team that understands the value of simplicity in doing justice to complex matters, 'The Lehman Trilogy' unfolds a tale of extravagant wealth with an even more dazzling economy of means...It’s the miracle of three men, on a nearly naked stage, resurrecting vanished lives and worlds, leaving an oddly indelible afterglow."
Read more

"If it weren’t for the superb work of Mendes, Devlin and the three astonishing performers, the heavy atmosphere might thicken into obfuscating fog. As it is, in the hasty final act, Massini tries to draw conclusions about a financial chaos he doesn’t understand and a show that has operated with gravity and grace spins out of control...As performance and staging, the first two sections of the trilogy are a titanic achievement."
Read more

"Strange, sleek beast: massive and dazzling on the outside, and in plenty of ways filled with virtuosity and vitality by a core of brilliant actors and top-of-their-game designers, all given the time and space to experiment, to build a world brick by brick with their ingenious director. But something is missing. The beast, for all its scale and artistry, is an automaton...The play is an epic feat of narration...It’s all technically intoxicating — and persistently without a point of view."
Read more

"This is theatrical storytelling at its most thrilling, a work of novelistic sweep and operatic crescendos, as rich in incisive character detail as it is in breathtaking visual coups...The play employs third-person narration to an audacious degree, and yet, under Mendes' unerring directorial hand it never feels static or cumbersomely expository. For such a long, dense narrative, it's unusually nimble, laced throughout with the wit and invention of great story theater."
Read more

"Time — more than a century, actually — really does seem to fly at the Park Avenue Armory, home at the moment to a spellbinding exercise in storytelling, as it can only be done on a stage...Visually, it’s all remarkable...Beale, Miles and Godley, bearing absolutely no resemblance to one another, convince us utterly that they are all cut from the same Lehman cloth; they propel the story with a force that feels aerodynamic."
Read more

“An astounding play with only one fault: It fails to mention that Henry, Emanuel and Mayer Lehman were slave owners...’The Lehman Trilogy’ has gotten rapturous reviews but usually with no mention of the hole in its moral heart. I, too, was dazzled by its three actors — who hold the stage for 3 1/2 hours — and by the staging, which consisted of one surprise after another, and even the lighting. It was a marvelous, unforgettable night of theater, a riveting reminder of why ‘live’ is so alive.”
Read more

"An unlikely epic drama and an unlikely must-see attraction...One would not have expected a play such as this to succeed — but indeed it does thanks to Massini’s distinct viewpoint, Mendes’ precise direction (which makes the production feel both sweeping and intimate), panoramic visuals, and live piano music that reflects each mood swing...Sharp, versatile performances all round."
Read more

"The saga of the Lehman Brothers is certainly nothing new; and in different hands, it could easily be a clichéd tale of rags to riches, innocence to greed. But as written by Stefano Massini, adapted by Ben Power, directed by Sam Mendes, and performed by three of the best actors in the world, it becomes an event not to miss!...Through narration and dialogue, the story unfolds with tremendous eloquence, very much like a fugue, riffing off repeated themes."
Read more