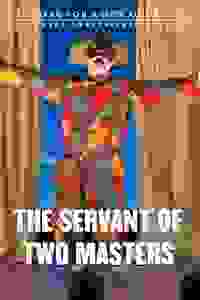 View in admin
The Servant of Two Masters
NYC: Brooklyn
78
Score it Scored!

The Servant of Two Masters NYC Reviews and Tickets

Theatre for a New Audience presents Carlo Goldoni's 18th-century comic masterpiece about a servant so hungry he takes on two jobs to survive.

In this contemporary American adaptation, no two performances are the same. The actors improvise along with the written text in the commedia dell’arte style. Masks, playful costumes, and original music create a fresh take on this classic work. This marks the New York premiere of this award-winning incarnation of 'Servant,' which was originally produced by Yale Repertory Theatre in 2010 and toured nationally.

See it if you love slapstick. I found SOTM tedious w/ few laughs, but admired its energy and staging. Beautiful Act II song by 3 women. Fireflies!

Don't see it if you want depth. This is fluffy, but audience loved it. Fascinating glimpse of Commedia. Current references are fun, but overdone. Needs cuts

See it if you'd like a silly (but not fluff) show. It's been updated nicely to reflect modern moods and pop references. Some jokes fall flat.

Don't see it if you can't follow a convoluted old (as in 1700's) style story. It's in English and mostly modern but still hard to follow at times.

See it if you want to see an energetic cast give their all in a well-staged commedia dell'arte. Following tradition, this is silly & improvisational.

Don't see it if as the NYTimes (a victim of much ridicule throughout) points out, you'll find the non-stop modern references increasingly dumb & insulting.

See it if You like to see a silly play and be happy! The cast is energetic and the storyline is ridiculous, but the actors and the audience loved it!!

Don't see it if You want the original play and dislike a classic being changed with current lines to fit today's circumstances;are a prude Read more

See it if You like absurdist comedies with brilliant acting and a lot going on. A wonderfully told stories by stellar actors who really get into it.

Don't see it if You don't enjoy the breaking of the fourth wall, raunchy humor, sometimes over played jokes, and basic all around silliness.

See it if you're interested in seeing commedia dell'arte (with modern topical references). The basis for One Man, Two Guvnors.

Don't see it if you don't like bawdy, crude and sometimes just silly humor. One Man, Two Guvnors did it much better.

See it if You want light and funny. You don't mind a lot of movement on and off stage. You like slap stick comedy. You want to laugh and enjoy silly.

Don't see it if You want something deep and moving. You don't like slap stick comedy. You are not open to something different. You are too serious. Read more

"While the production had some in the audience consistently in stitches, I found it laborious, arch, stuffed to the point of stultifying with contemporary jokes, and only fitfully amusing. Actually, fitfully is being generous…The onslaught of anachronistic references began to feel more like an act of desperation than like freewheeling invention, as if the director and his collaborators did not trust the material to delight us without continual goosing."
Read more

“The show takes an anything-goes approach via stock characters, one-liners, slapstick, masks, songs and snatches of anachronistic improvisation…Epp—a very gifted physical comedian—plays the dopey-wily Truffaldino…The energetic ensemble essentially throws spaghetti against the wall, sees what sticks, and serves that up; then it gathers the remaining noodles from the floor, pours on some cheese, and serves that up too, with a genuine smile."
Read more

"The entire cast gives it their all in performing this thin yet convoluted plot, and that is part of the problem. The more you encourage them, the harder they push the comedy in ways that just aren't funny...Certainly, many viewers will delight in such gleefully lowbrow humor. Epp sells it better than anyone in the cast...Alas, even he cannot compensate for an overly long script weighed down by zany line readings and mildly funny sight gags."
Read more

"A pretty flat glass of prosecco...The jokes, at least at the performance I attended, rarely landed. Or they landed, all right, but mostly with a thud...Epp has a blessedly light touch, effortlessly bouncing around the stage and switching out personas like so many carnival masks. If only his material were better, this might be a convulsive evening. In a cast filled with would-be cutups, the ladies fare the best...It looks like a farce, it acts like a farce, but somehow the laughs have vanished."
Read more

"A wondrous thing, a campy, happy romp just perfect for a New York City beset with feelings of dread…Of course, it’s not the silly plot, but the execution of it that counts and these actors pour everything they have into bringing these characters to life…This is a production that should move to Broadway. It is, by far, the most entertaining show in New York City and deserves to be seen."
Read more

"Farce is a polarizing form of entertainment...The cast of classically trained actors engage in energetic slapstick...In the tradition of commedia dell’arte, many jokes are risque...The proceedings close in a manner as picturesque as the beginning: an outsize crescent moon rises over a wild goose chase involving 11 actors and all the aisles of the orchestra section. For people who like farce, all of this is heavenly stuff. For those in the anti-farce camp, it's likely to be torture."
Read more

“A beautifully performed, cleverly staged, attractively designed but somewhat hollow rendition...Bayes's approach is to return 'The Servant' to its improvisatory roots and to recapture the wild zaniness and madcap, anything-goes excitement of commedia...But everything here is so carefully calibrated that there seems little room for real improvisation...When it ends, after two and a half hours, you may feel, with me, that it's overstayed its welcome by an hour.”
Read more

"[T]he jokes come as rapidly as machine-gun fire; if you don't like one, no need to worry, since six more have been made in the time it took you to hear the first. Chances are you'll find enough of them funny to laugh continuously for the play's two and a half hours."
Read more

"There is much to laugh about in TFANA’s production of Carlo Goldoni’s raucously entertaining farce, and boy, do we laugh. Every formula for comedy is either turned on its head or played to its full predictive hilarity…’The Servant of Two Masters’ stands firmly on Epp’s rollicking intelligence and the comic strengths of the cast. For the jaded theatergoer, TFANA’s production provides all the things the wearied mind desires: longing, love, song, dance and the simple beauty of laughter."
Read more

"Laugh you will...Jokes are shot out like machine-gun fire from the performers of this piece...Even at these moments when the jokes miss their mark, the performers and the plot move along and the audience runs along beside them...A great deal of the piece is meticulously rehearsed and planned and is as finely tuned and breathtaking as any Abbott and Costello routine."
Read more

"Director Christopher Bayes and actor Steven Epp in the lead role of Truffaldino make this commedia dell'arte work, which was written by Carlo Goldoni in the 1740s, come alive with hilarious, rowdy energy...The play has been larded with up-to-the-minute jokes...Epp is supremely gifted with physical comedy — a.k.a. clowning — which is a good thing since he can't make faces to be funny...Bayes is also an expert on clowning...The cast is full of talented comic actors."
Read more

"The gonzo glee of the performances holds it all together; director Christopher Bayes has done wonderful work with the ensemble. The pacing, as befits classic farce, is blindingly fast…Some of the slapstick bits are screamingly funny…'Servant of Two Masters' is thoroughly enjoyable and deliriously well-performed, though ultimately fairly disposable. I laughed in a lot of spots, and while the whole thing doesn’t add up to more than goofy fun, sometimes that is just what you need."
Read more