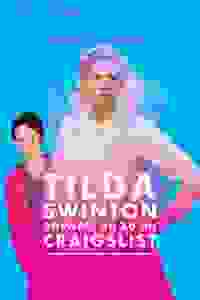 Tom Lenk ('Buffy the Vampire Slayer') stars as Tilda Swinton in the New York premiere of this comedy about life with one of the galaxy’s greatest living actors.

In 'Tilda Swinton Answers an Ad on Craigslist' an isolated and aimless gay man with a "roommate wanted" ad on Craigslist finds his life, family, and relationship flipped upside down when the ad is answered by effusive and other-worldly actress Tilda Swinton, who demands she be allowed to study and dissect his sad life for her next big movie role. The two very different personalities clash immediately as things get comically chaotic and surprisingly cathartic.

See it if You know Tilda Swinton, because it will be amusing for you. You like funny shows. You want an enjoyable night out with friends.

Don't see it if You don't know who Tilda Swinton is, because it may not be as fun for you (although still entertaining I would think!).

See it if You enjoy a fun, current, touch-of-drag cabaret show that has some heart and great fun!

Don't see it if You like fully realized productions with scenery, dance and some distance between stage and audience.

"A brilliant rendering of coupling in our social-media paradise...Tom Detrinis and his cast have put together a memorable, surprisingly coherent farce, lampooning more millennial conventions that I can count...With perfect timing and incredibly frenetic delivery, Lenk makes the most of every single word. It’s a virtuoso performance in every way. When he’s onstage, the play is his...The rest of the cast were exquisitely in tune, skillfully adapting to the style’s demands."
Read more

"Cleverly written by Lane, sharply directed by Tom Detrinis, and played to perfection by Lenk...Lane effectively underplays the sad sack Walt as the perfect counterpoint to the deliciously, over-the-top Ms. Swinton...Lenk has nailed Tilda's toss of the head, her accent, her hyper self-awareness, her divaness. Bravo, Tom Lenk!...So many wonderfully, witty lines and throw-aways from the mouth of Tilda, from the pen of Lane...Grab a ticket to this if you can."
Read more

"It's ridiculous, most definitely, but in the best way possible; smart as a whip, crackling with often silly jokes but inventive set-ups, anchored with solidly thoughtful and ludicrous comical performances by a cast of seriously funny actors, that know that the biggest laughs come from something deeper than a dirty stupid joke. Most of the time...This is no Shakespeare...But you'll be touched both in your heart and your funny bone."
Read more

"This was exactly the ridiculously fun and silly play I thought it was going to be...Most of the fun to be had comes in the person of Tom Lenk's outrageous performance as Ms. Swinton...Tom Lenk is perfection in a role he seems born to play, delivering the most absurd lines with conviction and deep gravitas."
Read more

View in admin
B
Matthew Rettenmund

"The farce allows Lenk to embody not the real Tilda Swinton, but a hysterically absurd logical extension of her, a creature at once cool, kooky, serially iconic, genderless and not of this world...You can squint and forget it isn't Tilda up there...If you love Swinton, you'll be grinning ear to ear at the references to so many films from her oeuvre...The show's cerebral sense of humor will please anyone attracted to that title, and Lenk's outrageous ad-libs will have you rolling in the aisles."
Read more

"Lenk’s drama queen cavorts in the style of Gloria Swanson or some other tart-tongued, camera-worshipping celebrity...Lenk performs with flawless aplomb; if his character is a campy caricature, well, it’s an admirably crisp, well-paced one. In multiple roles, both Sullivan and Entwistle prove skilled comedians...The main problem comes down to the script, which features a smattering of laugh lines but too few...A lot of reiteration and excess silliness—not, for my money, the inspired kind."
Read more

"Lenk’s performance is energetic, sharp, and hilarious; he’s not only constantly funny but occasionally really does channel Swinton’s odd intensity...The main problem here is that all of the stuff with Tilda is gold, but most of the other stuff is not. However, Lane is responsible for writing plenty of great lines...Let me be clear: most Swinton or Lenk fans are going to thoroughly enjoy themselves. It’s just unfortunate that the play itself is more variable in quality than it might be."
Read more

"The cleverness of Lane's script and the sharp comedic mastery of Lenk makes 'Tilda Swinton' a play you won't forget...Lenk is simply remarkable...He takes the iconic and quirky actress and amplifies the things about her that make her sort of kooky...Lenk's immaculate timing is what makes the role work...Consistently hilarious...For a show with a set up as goofy as this, it was a surprise to also be moved in between stomach-clenching laughter."
Read more