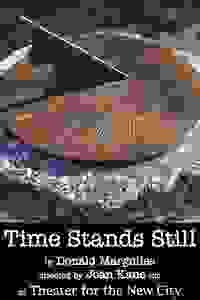 Set in Brooklyn, this contemporary drama revolves around Sarah, a photo journalist who has returned from covering a war in Syria after being injured by a roadside bomb.

Sarah's reporter boyfriend James is swamped by guilt after leaving Sarah alone there. They receive a visit from their friend Richard, a photo editor, who introduces them to his new girlfriend Mandy, who is much younger than him. The play focuses on their relationships and Sarah and James's prospects at a more conventional life.

See it if you want to be a first-hand witness to human interaction among four talented actors on a topics that ripple through our lives today.

Don't see it if you cannot stand the pain or the desires of those different than your own or if the topic of war photography and reporting are not for you.

See it if It's a story about relationship, how a couple handles their bad experience oversea, when reporting new/pictures

See it if you’re interested in the ethics of making art out of human tragedies, or examining up close the minute psychic shifts of a couple in crisis.

Don't see it if you want your theater to feel totally new, or if descriptions of what happens to bodies in contemporary warfare make you queasy. Read more

See it if you want to try to understand the role of wartime journalists & photojournalists and the consequences of their decisions.

Don't see it if you don't want to hear about pain, both physical & psychological. Read more

See it if You are interested in the consequences of a calling to be a wartime correspondent/photojournalist on one's personal life. Nice acting.

Don't see it if Intense self-examination makes you uncomfortable.

See it if You want to see a play about how people cope with a traumatic experience and how it impacts relationships.

Don't see it if You are not interested in a great play in a great space performed by a great cast about a traumatic experience and how they handle it. Read more

See it if you like intimate shows with great acting and strong character development. This is about how relationships change when time stands still.

Don't see it if prefer big high budget productions with a lot of plot twists. This is a predictable examination of characters and their desires in life.

See it if Superb acting, master playwright. Extravagant set for off off Broadway.

"A thoughtful revival...This play is more than a play. It speaks of films and ideas and asks why people want to have certain jobs and read (or don't read the news). As the truth is slowly revealed, we see characters struggling to hold in more information than they care to share. All of this is a triumph for director Joan Kane...The theater is a great place to examine the comic side of the generation gap, especially in relationships."
Read more

"Under the direction of Joan Kane, the play is staged wonderfully and leaves the audience engaged throughout all the humorous moments of the play, as well as the more emotional ones...The cast of this show does an overall solid job at bringing these characters to life...This was a very well-produced revival of a very well-written play, which is easily one of the better plays I’ve reviewed that revolve around themes of love and romance."
Read more

"'Time Stands Still' is an insightful and incisive exploration of the changes that occur in people’s lives...It is also a thought-provoking commentary on the ethical considerations which might enter into one’s choosing to photograph an injured or dying child rather than coming to the assistance of the child. The four actors are all outstanding, each in his or her own way."
Read more

"What makes Margulies's masterful 'Time Stands Still' so unique is that, while it incorporates all the necessary dramatic elements, the play never relies on them to tell the story...Avoids many clichéd tropes...Top-notch acting and chemistry between the actors also brings to life the underlying demons the characters face. And while the play occasionally meanders, it is ultimately a treat to watch as characters come to life...Seeing this play is worthy of your time."
Read more