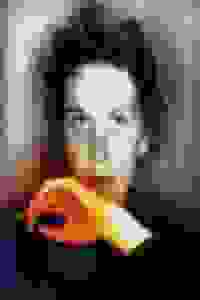 Written and performed by Page's only daughter and helmed by Tony-nominated director Wilson Milam, this 90-minute evening is an opportunity to learn about one of the most influential, celebrated, and private American artists of the 20th century. An intimate story of a true rebel and trailblazer, 'Turning Page' presents a masterful woman who was years ahead of her time.

See it if you want to know about one of the greatest 20th Century actresses played by her daughter. Uncanny & Moving, if it's playing SEE IT!!

Don't see it if you're not into 1 person shows. Or don't want to know theatre history. Or want to see HAMILTON.

Don't see it if the subject matter doesn't interest you

See it if You are a fan of Geraldine Page, bio-shows or of Angelica herself. She does a masterful job here.

See it if you love classic films and theatre history. If you want to learn about one of the greatest American actresses of all time.

Don't see it if you're not a fan of great acting or biographical shows.

“In the one-woman show 'Turning Page,' Angelica Page takes on perhaps the role of her career—that of her real-life mother, Geraldine Page...It's an interesting device learning about Angelica's atypical childhood through her mother's voice…As directed by Wilson Milam, Angelica's writing comes alive in a true tour-de-force performance—a valentine to a mother, a woman, and a seminal actress that we all lost too soon.”
Read more

“It is amazing that her daughter can emulate her persona, the cadence of her very recognizable speech pattern, and take the emotional roller-coaster ride…There are moments when Geraldine becomes almost a caricature in the theatricality, and sometimes the pace of dialogue flows much too quickly. However, you’ll be swept away by Angelica Page entering the world of life as Geraldine Page in all its complexity."
Read more

“A beguiling one-woman show…This rough-hewn offering provided a memorable showcase for the marvelous eccentricities of an Actors Studio original...It was also an opportunity to become better acquainted with Angelica's own considerable gifts as a performer…For those who have been touched by Page's sorcery — and I personally don't know any great actor who hasn't been — Angelica's virtuosic conjuring of her mother's spirit is something to behold."
Read more

“It was difficult to find an entry point, and I found Angelica Page’s one-woman act a bit tedious for a show lasing two hours…I did enjoy snippits of this actress’s life…Angelica Page brings her whole self to the stage…The closeness Angelica Page has to the subject matter might end up being part of her problem. The play may satisfy a niche group, but it fails to connect Geraldine Page to a broader audience…We never forget that this play is a tribute."
Read more

"It rightly concentrates on the mother/daughter relationship, but the structure of the play is diffuse and feels unformed and in need of tightening and a much stronger forward momentum. The performance was not helped by far too many rapidly spoken lines that disappeared upstage."
Read more