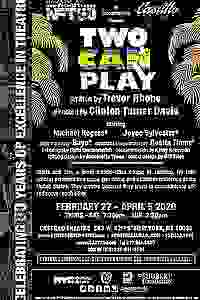 The New Federal Theatre presents a revival of this comedy, where a lower middle-class couple in Kingston try their wildest schemes to escape gun crime and establish residence in the United States.

They survive because they learn to communicate and rediscover each other. Playwright Trevor Rhone was the artistic giant of Jamaican theater. The play celebrates the pent-up need for self-discovery and personal development in Jamaican women, a theme which is also universal.

Don't see it if you can't laugh at wife being disrespected (Act 1). Still, she gets her day (Act 2). Civil unrest backdrop of 70s Jamaica. Could use cuts.

See it if You want to see a fifty year old show that is as relevant today as it was when it was written. Great staging; acting; lighting.

Don't see it if You can’t get past the accents or the fact that it’s a little uneven. Each act feels like it’s own play.

See it if You want to see a Caribbean couple come up with a scheme to get to the US. Some very funny, as well as touching moments. Excellent acting!

Don't see it if You don’t like hearing Caribbean accents or not in a mood for comedy. Read more

See it if You want to see a dramedy based on a couple from Jamaica that is working on a way to get to the United States by any means necessary.

Don't see it if Accents in a play bother you. It bothers you that a husband disrespects his wife. Unrest in Jamaica doesn't sit well with you.

See it if Well-acted,well-directed&well-staged play on serious social issues such as women's inequality,violence,race& immigration w/use of grt humor

See it if Two talented performers playing a Jamaican couple willing to do whatever it takes to get to the USA.

Don't see it if Jamaican accent of Mr.Rogers not always let you understand the conversation. Play itself need a little trim. Read more

See it if You want an entertaining story of a couple’s struggles and evolution. Great staging.

See it if for a chance of seeing work by the late Trevor Rhone, iconic Jamaican dramatist; to root for women empowerment plots; foolish men charm you

Don't see it if Jamaican accents & slang will irk; you prefer a play to be either farcical or serious--but not a mix of both; you prefer a large cast Read more

"'Two Can Play' has, arguably, aged better than many other 35-year-old dramatic works. While definitely a 'message' play, it doesn't seem preachy-at least not in this sensitively rendered iteration from Davis, Rogers and Sylvester."
Read more