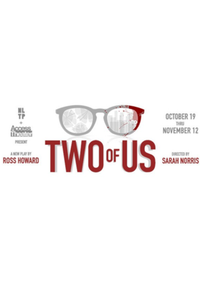 View in admin
Two of Us
NYC: Soho/Tribeca
80
Score it Scored!

Two of Us NYC Reviews and Tickets

Flashing between Honolulu and New York City, 'Two of Us' shines a spotlight on the lives of Chapman and Abe, and the social and domestic pressures that led him to assassinate John Lennon in 1980. A showdown between the real and the fantastic, 'Two of Us' examines timely issues such as economic hardship, gender equality, mental health, celebrity culture, and gun violence.

See it if want a trip into the mind of an assassin with tangible passes thru ego, super-ego & id,

See it if you are interested in romantic relationships which examine mental health issues or would like a hypothetical look into Chapman's life.

Don't see it if you do not like smaller productions or are bothered by stories including mental health issues.

Don't see it if You are not interested in John Lennon and his killer. You don't want to hear an interesting story.

See it if You are interested in the story behind John Lennon's murder (although don't expect details to be 100% accurate).The presentation is clever.

Don't see it if You want a straightforward presentation of the story, as several characters are figments of the imagination.

See it if you are familiar with the story of Lennon's killer; a nice dive into his mindset

Don't see it if you want a straightforward linear play; don't have an imagination to picture the thought going on inside the two main character's heads

Don't see it if you want-a lighthearted piece (this is an avant garde exploration of mental health, gun violence and celebrity)

See it if People who want to know the inner workings and the history of the man who killed Lennon.

Don't see it if You don't want to know what really happened.

"It seems as though these transitions and the set exist to show just how out of place Chapman is—his social skills are a bit lacking, especially sexually, and the musical transitions allow the audience to see his stiff attempts at dancing. But the transitions tend to cut off all of the tension built up in the previous scene...Even if this extended metaphor doesn’t work for you, you may still leave wanting to find your high school copy of 'The Catcher in the Rye' and give it another read."
Read more

"This is all interesting stuff, both historically and psychologically. Yet it doesn’t quite fill up the space and time of the drama...Sarah Norris directs skillfully...But with all that solidly creative work, the themes don’t expand enough to fully inhabit or fully enliven the action. The script makes its points repeatedly, a couple of scenes go on too long, and I was left feeling only partially engaged by all the good work happening on stage."
Read more