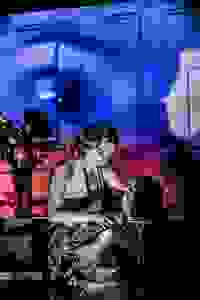 An outrageous portrait of a grandiose tyrant and his voracious ways from the international theatre company Cheek by Jowl, presented as part of the Lincoln Center Festival.

King Ubu is a scheming and murderous yet ridiculous potentate who has inspired parodies of politicians and dictators from Joseph Stalin to Idi Amin. This production by UK's Cheek By Jowl, is set at a posh dinner party in the home of a couple and their disaffected son, who watches the world through the lens of his video camera. The images he captures are streamed and projected live as banal dinner chit-chat erupts into comic absurdity and reality and fantasy intertwine. Performed in French with English supertitles.

"It’s impossible not to be transfixed by the raging force of its energy...What makes this 'Ubu Roi' more than a clever riff on a period piece is its sense of the raw, ravening anger in the boy’s satirical vision. The show’s penultimate scene hits you like a blast of dirty, icy water. It’s an all-too-relevant reminder that the asocial fury and confusion we tend to think as just a passing phase (he’ll grow out of it) among teenagers does, on occasion, give birth to truly murderous monsters."
Read more

"“School-boy humour” tends to get a bad press. But where would theatre be without it? As a golden opportunity arises to watch Cheek by Jowl’s acclaimed production of Alfred Jarry’s Ubu Roi – seize it! – it feels only right to bow and scrape a bit before Jarry’s seminal act of juvenile disrespect."
Read more

"Amusing, slightly exhausting production...But Donnellan, who is one of the most inventive directors alive, and his designer, Nick Ormerod, rescue the evening from glibness by visually and verbally switching the point of view."
Read more

"The brilliance and intelligence but also the fun of Director Donnellan's wise, ticklish staging is that it out-does Jarry himself. By interweaving scenes of an unruffled dinner with the maniacal explosion of subterranean force – Donnellan permits himself not only to match the Surrealism of Jarry’s original, but in some ways to better or advance it."
Read more

"This radical spin has its tongue in its cheek, a snigger in its jowl and an accent on showing the bourgeoisie going bonkers. The show is perfectly judged. If the cast seem to having more fun than the audience, it’s nonetheless no boo-boo, this Ubu."
Read more

"How do you recapture the shock impact of Alfred Jarry's 1896 play, with its savage portrait of a grotesque monster? Declan Donnellan has had a brilliant idea in this production: he plays it as the Oedipal fantasy of a camcorder-clutching teenager taking revenge on his parents and their French bourgeois world."
Read more

"This exhilaratingly fresh and witty take on the play has a blackly hilarious twist...This is a production that keeps flipping, with laugh-out-loud switches of intensity, between the babble of an ordinary bourgeois function and the madly epic misadventures of the royal pair."
Read more