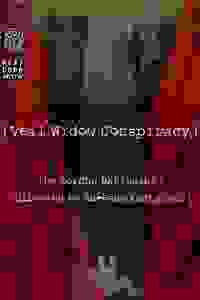 In its exploration of many retellings of a story from Western China, this new work probes the slipperiness of what we call truth, where reality and fiction each have an angle, and no metaphor comes without an agenda.

"[Veil Widow Conspiracy]" is built around nested versions of a story from 1922 Xinjiang in Western China: a political murder mystery dramatized in a 2010 big budget Hollywood film, then amended via DVD extra interviews with the cast and crew, in censorship negotiations with the Chinese government, and finally by two lovers in a futuristic, dystopian Brooklyn, without the means to watch the film, one describing it to the other by memory in the dark.

See it if A very wordy play that can be confusing at times. Good acting, costumes.

Don't see it if A performance that needs to be cut diwn and reworked.

See it if you would like to see good actors on a wonderful set dealing with a story within a movie in the future. Best to have knowledge of China.

Don't see it if you want a seamless play: multiple characters played by cast, difficult to understand parts of story, some voices need more projection.

Don't see it if you like your storytelling clear & concise; you're not looking for anything too cerebral, narrative-heavy, long-winded & meta. Read more

See it if Under the metaphoric veil, stories shift because of money, politics, and power. How much do we believe what we're told?

Don't see it if Turducken (3 layers) story a bit confusing, probably can edit one layer out. Weaves educational material about an exploited part in China. Read more

See it if you're interested in ambitious and creative storytelling, theme of truth, exploration of Chinese politics, some parts metatheatrical.

Don't see it if you're looking for a straightforward play or material that is lighter/less dense. Confusing at times, especially in the beginning,

See it if you'd like to support NAATCO and their important work.

Don't see it if you have a short attention span. Read more

“Dahlquist’s provocative and remarkably layered new play...With three story lines sprawling over two continents and more than a century, it considers the power of storytelling — whether in art or in calculated lies — to shape and bend people’s perceptions of what’s real...An excellent cast...Kudtarkar beautifully handles the tonal shifts from one reality to another, but the scenes set in a grim future Brooklyn...feel unnecessary. They’re also drab in comparison to the rest.”
Read more

"The story lines are related and tucked inside each other but really serve to comment on philosophies and moralities...The metaphorically dense dialogue emerges early on...The mishmash of interlocking stories continue from 1922 events to the movie shoot to the cast speaking directly to the audience...Dahlquist's play is long-winded and the director (Aneesha Kudtarkar) was not able to help us understand why this particular story was being told."
Read more

“’Three different narrative lines, none of them with a compelling situation or characters...It isn't clear if the director has encouraged her cast to give stilted, bad-movie performances, but if so, she has succeeded magnificently. The line readings are wooden and heavy with insinuation...Exactly what this tripartite tale means to say is left obscure...A complex dramatic construction, but it is uninhabited by recognizable characters or comprehensible ideas.”
Read more

"Gordon Dahlquist's '[Veil Widow Conspiracy]' is a challenging work-cerebral, complicated, extravagant in language and scope. Some people may find it affected, and it does seem at times to revel in its own complexity. (Also, what's with those brackets in the title?) '[VWC]''s ambition is sometimes reminiscent of Tom Stoppard's work, and there are certain touches of Stoppardian humor in the writing. (Don't, though, expect an uncontrollable attack of guffaws.)"
Read more

"Confusing, verbally inflated, cerebral, and emotionally uninvolving; it's also well-acted and has enough substance to suggest the play it might have been…The play dabbles in issues of truth and lies, reality and illusion or fantasy… Further befuddling the overwritten play are the frequent intrusions of characters speaking direct address monologues, either pseudo-poetic or prolix, academic statements couched in an odd mixture of the prosaic and the theoretical."
Read more

“An ambitious play...Dahlquist's winking irony often engages. But the play can also be tiringly heavy on exposition without exposing what it's all really about...The storytelling...feels far more knotty than it needs to be...’[Veil Widow Conspiracy]’ sets off the most sparks in the too-rare moments when the connections between timelines emerge clearly...Ultimately, however, it's not entirely clear what story we're supposed to walk away thinking about.”
Read more

"Intriguingly intricate but ultimately not entirely satisfying, the script is trying to do something really difficult...It’s never easy to create a play of ideas and also yoke them to characters and a story that propels itself forward. Harder still, of course, when you’re trying to serve three stories at once, in the service of one set of ideas. As the second half of the play picks up steam, it almost all comes together, but the film narrative still weighs down the piece."
Read more

“The work is ambitious, dense, and multi-layered, with each member of the cast playing two or three roles in a meta-theatrical narrative that moves back and forth... As a result of the intricate inter-weavings of the plot, it is often confusing to follow...The slow-paced script could benefit from some tightening...[Veil Widow Conspiracy], though in need of some clarification and editing, does offer an intriguing exploration of the thin and ever-changing line between fact and fiction."
Read more