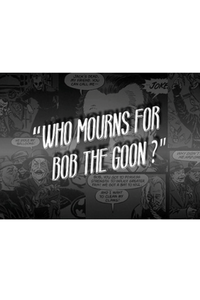 View in admin
Who Mourns for Bob the Goon?
NYC: Soho/Tribeca
79
Score it Scored!

Who Mourns for Bob the Goon? NYC Reviews and Tickets

The Playwriting Collective presents Joshua Young's new dark comedy about veterans attending a therapy group because they believe they are third-tier comic-book characters.

Each member of the group has dealt with PTSD by identifying with less heroic, more obscure comic characters. They don't think they're Batman or Superman, but rather folks like Bob the Goon, who was a Joker henchman from the '89 'Batman.'  The group begins to unravel when an ex-pilot, Langly, joins up despite her belief that she is from an anime story, not a comic.

See it if a strange drama about group therapy in which the participants think they're insignificant comic book characters appeals to your inner nerd.

Don't see it if you wouldn't enjoy something as bizarre at that sounds.

Don't see it if You hate puppets or anything nerdy. The acting drags at times & some actors had diction issues. The play was about 30 min too long - edit!

See it if you appreciate excellent video, sound design and puppetry, unique storytelling and comic books.

Don't see it if Some of the characters were better rendered than others with unclear diction & underacting throughout. Script would benefit from major cuts.

See it if You're a comics fan who can take a joke, love the puppets of James Ortiz(!), believe in honest work that give voices to the underserved.

Don't see it if you have no idea who Bob the Goon is.

See it if you like serious drama that explores darker psychologies.

Don't see it if be cautious about seeing this if you are afflicted with PTSD from military service, though this could also be a reason TO see it.

See it if You are into clever and intelligent writing with fully, realized characters, especially strong female characters.

Don't see it if War and PTSD are touchy subjects for you.

See it if you're a fan of comic books, puppetry, and/or great writing!

Don't see it if you don't like fantastical or dark pieces.

“A not-always-cohesive blend of reality, fantasy, paranoia, and dark satire...The playwright has a lot to say about the difficulties faced by war vets...It is very difficult to stay on top of the varying threads...One element that does work well is the visualization of the fantasy figures...Director Lucia Bellini and the cast do their best with the knotty and sometimes dense writing that prevents the characters from coming fully to life."
Read more

“The heart of the play is in the right place, but, though the concept is interesting, one wonders if such serious subject matter as PTSD and serious mental health issues is not handled somewhat irresponsibly here…As a dramatic thought piece, it is much fun, but as a comment on real-world problems, it is frustratingly detached and devoid of any true substance, which would be fine if it didn’t seem to strive so very hard towards the contrary.”
Read more

“It is a compelling story set against a beautifully designed visual world, and containing moments of honest humor and poignancy. However, this production is a bit loose around the edges. One can sense moments of lagging action or lack of specificity that drive the audience to lose attention and focus...Additionally, the script itself runs long, and needs a trim...Perhaps with a bit more time, ‘Bob’ will find its way to victory as a captivating and enlightening theatrical experience.”
Read more

"A fiercely contemporary play...Playwright Joshua Young deftly leads us through a multifaceted story–part puppet (which are gorgeous and terrifying,) part comic, all heart...It’s a tightly directed, quickly moving story that vacillates between dangerous and fantastical, but always deliciously theatrical. The ensemble is vibrant, compelling, and hilarious. Though the comic book world the characters believe they inhabit is two dimensional, this play is not."
Read more

“Joshua Young’s play is set in a group therapy session among military vets...Each has a particular, occasionally harrowing, story to tell...The play posits an intriguing premise, aided by clever projections, to explore the mind’s fragility. Fans of the comic characters will appreciate their various manifestations. There is good stuff here, but in need of editing. The final two scenes are unnecessary and drain an otherwise interesting, ably performed work of its energy.”
Read more

"This play is a brilliant and innovative look at the effects of war. Playwright Joshua Young skillfully masters the psyches of his characters so that we may look voyeuristically at the kind of everyday life that precedes war. Young manages to find light and humor and depth and reality. Beautifully directed by Lucia Bellini, this play is well worth seeing...This incredible ensemble brings this magnificent piece to life...Overall this is an incredible play and executed brilliantly."
Read more

"This eccentric cast of eight very physical actors was filled with talent. Carhart took to the stage with ease and specificity...His presence and connection to the rest of the cast was powerful and compelling...Elise Hudson played the female character of Langly...Offering a different side to her character, Hudson carries truth and clarity to the stage while leaving the audience with much to reflect on."
Read more