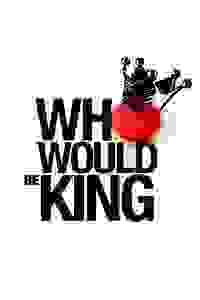 View in admin
Who Would Be King
NYC: Midtown W
48
Score it Scored!

Who Would Be King NYC Reviews and Tickets

Violence and betrayal, angels and prophets, villains and kings…and chickens. Who rises to rule and how far will he fall in the great clown kingdom? This production swings from absurd buffoonery to high tragedy, with kinetic physicality, silliness, swords, and live synthwave music. 'Who Would Be King' tells the story of a good man given an impossible task and asks: what separates good from great, and what lies in between?

67
Entertaining, Uneven, Too many ideas, not cohesive

Don't see it if you expect a thoughtful plot and good character development.

See it if Even if it's free, your time is worth more than sitting through this childish show. Lighting is its only saving grace.

Don't see it if you like theater. This amateur show should have folded in Boston.

See it if You enjoy silly reimaginations of classic stories responding to the current political climate. You enjoy clowning a la Big Comfy Couch.

Don't see it if You like your shows very polished.

See it if you are 10 years old. A young audience member was thrilled every time a cuss was uttered.

See it if Big fan of the face & zaniness conveying a story as am I, this is for you, also has lots of action for actions sake it seems

Don't see it if Too little story disappoints you, it also seemed rather pointless and cliched

See it if you like old stories made new, that resonate and shed light on today's issues.

Don't see it if you like elaborate sets, or are afraid of swords.

See it if You enjoy off-the-wall zany humor or are intrigued by the idea of putting a twist on Biblical stories. You like physical theatre/clowning.

Don't see it if You have little patience for clown theatre, especially if it could use a lot more polish.

See it if you want to enjoy colorful acting.

Don't see it if you want to see a big production.

"Despite the comic, vaudevillian flavor of 'Who Would Be King', the message of pride coming before the fall is expressed with grace and colorful theatrics. Jason Slavick's direction keeps the cast rollicking along, taking advantage of every inch of Ars Nova. He is helped by an energetic cast, all on the same wavelength, giving their physical and emotional all. Silly at times, yes; but ultimately dark and meaningful."
Read more

"Illustrates both the promise and the perils of the collective approach...While each section is intriguing and often entertaining on its own, they do not connect at all; the play sags in the middle despite the energetic performance of the five-person cast, and any sense of intent gets muddled...While artistic director Jason Slavick directed the play, it feels here like no one was willing to demand more of the writing...The tragedy at the end, while compelling to watch, feels muted emotionally."
Read more

“Three people can’t come to an agreement on what to eat for lunch, how can thirteen people write a cohesive script? Short version: they can’t…It shows promise in the first half hour, then devolves into confusion and detachment...The clowning opening works well…The company are accomplished physical actors and they play well with one another…The problem is that LAB doesn’t want to tell the bible story, but they haven’t figured out how to craft the story they do want to tell.”
Read more

"Thematically and symbolically the show presents a lot of information to unpack...While the performance is entertaining and intellectually intriguing, and the themes are juicy and relevant, the production doesn’t feel quite right. It might benefit from more stage time–if it were a two-act play the show might have more room to flesh out those themes, and isolate the biggest of them. Despite its daze of themes, 'Who Would Be King' is a relevant and intellectual challenge with a stunning ensemble."
Read more

“The LAB ensemble and director Jason Slavick re-cast an ancient story in a way that feels immediate…It's a matter of personal taste, but the broadly overacted clowning of the first half struck me as forced. It's when the story takes a darker turn...that the play takes on dramatic substance. When the climactic scenes arrive, it's easy to find yourself gripped…This is a show with a heart, a mind, and red plastic noses all around.”
Read more

“With ‘Who Would Be King,’ the Liars & Believers ensemble have taken a yarn as old as civilization and transformed it into a whimsical and engaging journey…The buffoonery is delightful. Each of the five ensemble members is thoroughly dedicated to his or her multiple, exaggerated characters and to the craft of physical storytelling…The result is brilliantly robust comedy…The lyrics are simple but compelling…Every element of the production is well-crafted.”
Read more

“Between the ancient story, the artful clowning, and the spacy synth score, a unique effect is created. Some of it is a little on-the-nose...Some of the writing is a bit hackneyed, or downright bizarre, but there are some clever bible jokes as well. The complex motion and unity of the cast is fantastic throughout...Unfortunately, we never get close to the king, so we never really understand if he was great, or good, or just lucky."
Read more

“A beautiful patchwork of physical performance, storytelling, and boundless humanity…‘Who Would be King’ is a re-mixed trove of biblical tales told in a compelling and timeless way with great humor, and great humanity. The boundless energy of the talented cast showcased their incredible range…Perhaps most astoundingly, each cast member was nearly unrecognizable from one role to the next."
Read more