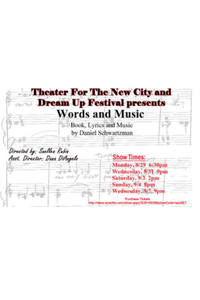 Words and Music (Dream Up) NYC Reviews and Tickets

Part of Theater for the New City's Dream Up Festival: This new musical examines the lives of two aging men struggling to stay afloat in the rapidly evolving New York theater industry.

Ed, a piano tuner and composer haunted by visions of his late wife, is writing a musical with his ailing lyricist friend, Howie. Ed pitches it to several theaters hoping one of them will bite. However, after several rejections, Ed's mental health begins to deteriorate, turning his collaboration with Howie toxic. The show chronicles Ed's struggle to escape his past, in the form of his wife's ghost.

See it if you like the old story of the composer/lyricist team who keep trying for a hit and never quite get there; have a best friend;like kitsch

Don't see it if you expect a surprise ending;expect perfect singing and elegant lyrics; do not give small time playwrights/composers/lyricists a chance

See it if You enjoy pale imitations of Sondheimesque life crises about two-dimensional characters who don't sing very well.

Don't see it if For the same price you can see a good movie.

See it if you want to experience well-meaning, affordable community theatre with a receptive audience?

Don't see it if you love music—you'll rarely discern melody in the mostly-spoken songs and vocal delivery painful; Kyle Hughes is the notable exception!

See it if Musicals are your thing and you've reached the age when you're resigned to the fact that your dreams will fade but life is still worthwhile.

Don't see it if clever song writing about the world of musicals and growing older has no appeal for you. I'm over 65 and I loved this show!

49
What were they thinking?, Disappointing, Excruciating

See it if you like a show with an awful story line; pitchy singing and bad acting...

Don't see it if you want to see good theater...

See it if You enjoy a story about male friendship and you don't mind some mediocre singing of nice songs, and some mixed levels of performances.

Don't see it if You are expecting highly professional singing and acting.

See it if You like simple and cliche . You're easily entertained .

Don't see it if Your looking for a deep musical with strong singing talent.

See it if You like trite tripe performed amateurishly in a theater with no a/c on a humid 90 degree NYC day.

Don't see it if You're expecting to enjoy an evening out at the theater.