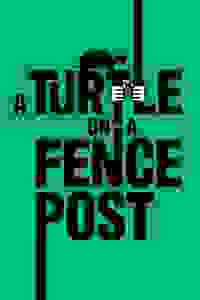 View in admin
A Turtle On A Fence Post
NYC: Midtown W
63
Score it Scored!

A Turtle On A Fence Post NYC Reviews and Tickets

A new musical about a prominent New Yorker whose world is thrown into turmoil by the state's most powerful man.

One of Bill Clinton's favorite expressions reads: "When you see a turtle on a fence post, you know it didn't get there by itself. It doesn’t belong there. You wonder who put it there."

Inspired by true events, Turtle On A Fence Post fictionalizes the inside story of Political Consultant Hank Morris' time in prison at the hands of former New York Governor Andrew Cuomo.

See it if You don’t mind sitting through a show desperately in need of editing to get to a good show with some very relevant, clever songs/staging.

Don't see it if You can’t appreciate a work that might need a little polish. There’s a really good two hour show in this two and a half hour performance.

See it if A good musical that is lite and funny at times. Good costumes and choreography.

Don't see it if Could have been cut down about 15 minutes.

See it if you like a story where injustice is revealed in the court system and abuse of system by politicians. Very relevant to our times.

Don't see it if you are still a fan of Andrew Cuomo. This is a brave play that reveals how vicious and unforgiving he could be. Read more

See it if you enjoy sitting through a vanity production.

Don't see it if you are a connoisseur of quality theatre.

See it if you enjoy Mary Sue fanfiction. I wondered why it felt like that, then read that the lead character was the scriptwriter. It was not good.

Don't see it if you won't enjoy a whole musical about someone's personal grudge. I don't know if it's Cuomo's fault this guy was in prison, and didn't care.

See it if If you must see everything after 18 months of no live theater. Maybe you'll say why a musical about this topic?

Don't see it if If you love musical theater, this show is not for you. A real hodgepodge. it's margarine NOT butter Read more

See it if singing and dancing in a prison. Surprisingly light-hearted considering the subject. Entertaining even if it's not really about Cuomo

Don't see it if you are expecting a musical about Cuomo. He is a character, but far from the main focus.

See it if You like to see theatre that's "so-bad-it's-good." You want to see a piece with an interesting reason for existing.

Don't see it if You don't want to enable a rich, narcissistic millionaire who proves that that those with the money can always make their voices heard. Read more

"In closing, I feel obligated to mention that, convincing as Turtle on a Fence Post is regarding its political history, it’s still one side of the Morris-Cuomo story. Could it be that wherever Cuomo is hunkering these days, he’s not so much planning a comeback as working up a Revenge-Answer musical?"
Read more

Unfolding from a stand-up comedy routine—“A prisoner walks into a bar…!”—and set in a comedy venue designed with ingenuity and style by Walt Spangler, Turtle veers from hokey to horrible helped by the spiffy routines staged by choreographer Kenny Ingram in over-the-top, sometimes kitschy, routines.
Read more

"With its numerous vignettes and songs, the piece is choppy and overlong. It does have potential, however. As a vehicle for a tale of a personal journey through trial to redemption, Morris’s real life story is well poised for success but only if the author cuts extraneous scenes and redundancies. He has tried to pack too many bells and whistles into one tale."
Read more

LaChanze stars in the Broadway premiere of Alice Childress's 1955 play.