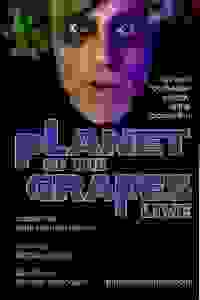 Planet of the Grapes Live NYC Reviews and Tickets

A reimagining of the 1968 film in the style of Victorian Toy Theatre, through the medium of virtual theatre.

An astronaut crew crash-lands on an unfamiliar planet in the distant future and are soon enslaved by a society where grapes have evolved into speaking creatures with human-like intelligence.

This virtual production spoofs the classic Charlton Heston/Rod Serling film through the lens of the Victorian era’s Toy Theater movement, where plays were performed in people’s homes on ornate cardboard sets by a cast of colorful cardboard characters.

See it if you love great theatre and creative forward thinking in performing artistry.

Don't see it if you hate grapes and fun.

See it if You like creative theatre that is original, imaginative and fun.

Don't see it if You don’t like toy theatre or dislike chimpanzees as the main characters.

If you had told me, say, a year ago, that would be watching a live toy puppet theatre production of a play based on "Planet of the Apes," I would have tossed you out the window. If, however, you had said the production was created and featured the talent of Peter Marino, I would have put the date in my calendar - in ink.
Read more