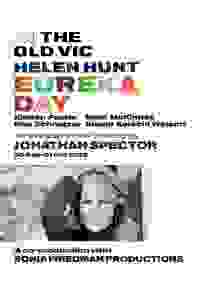 Helen Hunt stars in Jonathan Spector's comedy about a liberal school grappling with the vaccination debate.

The Eureka Day School in Berkeley, California: where progressive ideals sit at the core of its community. In weekly meetings, Eureka Day’s school board members develop and update policies to preserve this culture of inclusivity, reaching decisions only by consensus. But in the wake of a mumps outbreak, the school’s leadership has to handle the issue of consensus when no-one can agree on the truth.

Academy, Golden Globe, and Emmy Award-winning actress Helen Hunt will make her London theatre debut in the European premiere of Jonathan Spector's comedy. Helen Hunt is best known for her work in movies such as 'Mad About You', 'As Good As It Gets', 'The Sessions' and 'Cast Away'.

Directed by Katy Rudd ('The Ocean at the End of the Lane').

See it if You want to laugh out loud, and see a great play.

See it if you're looking for a clever, funny play about vaccine mandates. Good performances all around.

Don't see it if you prefer plays with lots of actions. The entire play takes place in a class room and the action is all in the dialogues.

See it if you want a play that will make you laugh while engaging in debate about a relatively charged topic.

See it if you want to see hysterical debating forums. Trying to achieve agreement in a group with very different POV on the same issue. So relevant!

Don't see it if you don’t like plays with debates, forums, discussions and/or are topical

See it if you want to laugh

See it if you would like a razor sharp dismantling of online debate culture and how it is spilling into real life and causing dangerous impacts.

Don't see it if you don't enjoy satirical views on current debates that makes fund of strong beliefs on different sides of the political spectrum.

See it if You want a new play that might relevant to your contemporary world. See act1 if you like laugh, act 2 if you like serious drama.

Don't see it if You have strong opinion about the subject. You may be upset with process & conclusion. Also better not expect hilarious comedy as advertised

See it if you're looking for a terrific evening of entertainment and clever performances.

Don't see it if you're offended by plays that poke fun at social issues.

"‘Eureka Day’ is just lacking a bit of the heft and muscle it needs to really storm this stage."
Read more

"This remains a needle-sharp comedy that packs a smart and timely punch."
Read more

"The evening moves from primary colour, almost crayon-crude, mirth in the first half to something more subtly, and emotionally, shaded in the second, the dramatic stakes for those involved don’t carry quite the requisite heft."
Read more

"The play might have gained by spending longer on unravelling these meaty subjects, especially the idea of investing 'belief' in the goodness of new science."
Read more

" 'Eureka Day' is a bracing corrective to the idea that you can only discuss serious issues with a straight face."
Read more

"This is the play that would have helped to keep us sane during lockdown."
Read more

"The kind of utopian consensus proposed by the 'Eureka Day' board now feels like a pipe dream. At least we can all agree that the Old Vic is supplying a brilliantly funny and cleverly thought-provoking response."
Read more

"In Katy Rudd’s highly coloured production, it’s as hollow as the echo chambers it lampoons, its characters cartoonish and its satire of liberal pieties unrevealing, if sporadically entertaining."
Read more