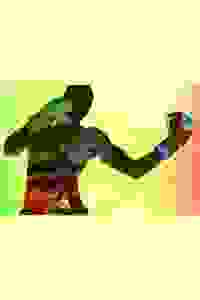 View in admin
On The Ropes
London: Finsbury Park
70
Buy tickets from £26 on TodayTix
Score it Scored!

On The Ropes London Reviews and Tickets

The world premiere of this musical drama about an infamous boxer's experience of the Windrush scandal.

Vernon Vanriel arrived in the UK at the age of 6 as part of the Windrush Generation and rose to prominence as one of the most influential Black British boxers of the 1970s & 1980s.

After a successful career and 43 happy years living in North London, Vernon found himself homeless, penniless & trapped in his family's home country of Jamaica.

'On the Ropes' fuses together music and poetry in this new drama, which serves as a celebration of how courage & dignity can overcome prejudice.

See it if you want a stark reminder of the human cost of political decision making, performed by a small, hard working and talented cast.

Don't see it if you want a show that paces itself well and with music that feels more than incongruous. Read more

See it if If you have an interest in British boxing, or learning about the Windrush Scandal impact on real lives with some good tunes

Don't see it if You can't stand a slow first act, true life stories, or prefer big budget shows. This was a 3-person cast, with a tiny stage Read more

See it if you want to see a relevant play - portrays a horrific event, reveals a great deal of history, bursts with passion & truths.

Don't see it if There is no reason not to see this.

"There's too much going on in On the Ropes, both in terms of the story and how its told...people are listening to him... and what a story he has to tell."
Read more

"This remains a story worth telling and hearing, but as a piece of theatre it’s no knockout."
Read more

"This is an important story to see on stage but one that might have been better enacted in shorter, punchier rounds."
Read more

"It’s just a pity that, for all the efforts of the high-energy trio, the script isn’t so light on its feet."
Read more

"This play is a reminder of the human cost of such callous and inhumane decisions, and of this stain on the nation."
Read more

"The production is peppered with reggae songs, performed beautifully by all three actors, but they drag the play down...Vanriel’s story remains a stirring one of systemic injustice, but often in spite of this show than because of it."
Read more

"The play's major stumbling block is its pacing and length. Like a prize fighter it should be nimble on its feet, but too often feels sluggish and in need of further work in the gym."
Read more

"This might be Vanriel’s personal narrative, but we are all too aware that there are thousands of others like it. These are stories that need telling and ‘On the Ropes’ is just the first round."
Read more