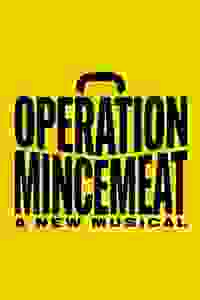 The award-winning whirlwind comedy about a corpse used to win a war returns.

1943. Wartime. 'Operation Mincemeat' sees Hitler tricked by a dressed-up corpse. This outrageous true story about the winning of the war in extraordinary circumstances promises pace and laughs.

This production is a revised and extended version of the show which played a sold-out run at the Diorama Theatre in 2019 and won the Off-West End award for Best Company Ensemble.

A fast-paced musical comedy written and composed by Spitlip Theatre Company. This production is recommended for ages 6+.

See it if You liked the parody of 39 Steps, but wished it was a musical. Your sense of humour is BBC Radio comedy. You want to watch great actors.

Don't see it if You crave a highly polished show.

See it if you want to see an incredibly hard working cast playing multiple roles each, with some catchy songs and a great amount of wit.

Don't see it if you’re not remotely interested in the history this musical bases itself on or if you’re easily offended, as some of the jokes are a tad edgy Read more

Don't see it if You have any sense. Read more

See it if You want a fast paced musical with great songs, writing and laugh out loud moments.

Don't see it if You want something with a high production value - the set is minimal but is used really creatively.

See it if Everything about this show is incredible: the cast, the music, EVERYTHING. The five person cast immerses you in WW2.

Don't see it if If you're not into Fringe theatre this may not be for you.

See it if You like entertainment above all, with heart and soul

See it if you want a fun show that makes you laugh and very unexpectedly cry, with a group of actors who bounce right off each other.

Don't see it if your looking for a big production musical - this one keeps it small and intimate, with relatively simple staging (done well though).

This show takes you by surprise at every turn, with many clever ideas that come off, and some that don’t, but which still make you smile.
Read more

With a versatile cast ... the piece makes shrewd points about old-world chauvinism. Shout-outs should go to director Donnacadh O’Briain, and to Gabriel Chernick, on keys and presiding over the small band.
Read more

There’s a lot of talent on show in 'Operation Mincemeat', but it would need several significant cuts to have a real emotional impact. It runs for two and a half hours; there is a sharper, shorter show buried inside.
Read more

‘Operation Mincemeat’ ... is itself slicker than it wants to appear, and clearly well-drilled. This really is an ensemble show, and SpitLip prove a winning one. Their style may not be for everyone, but you’d have to have a very stiff upper lip indeed for it not to break into laughter.
Read more

It is a totally brilliant musical. [It] has the fast-paced humour of a fringe show, yet its full-length musical run time never feels like a drag. It certainly helps that the musical talent on display is exceptional.
Read more