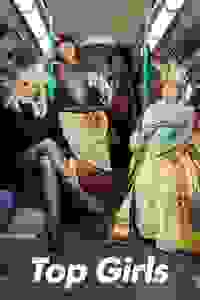 A revival of Caryl Churchill's comedy about a highly driven woman who runs an employment agency.

Set in the 1980s, this comedy follows the life of Marlene. At a time when Margaret Thatcher was elected as Britain's first female Prime Minister, Marlene is determined to make a success of the female employment agency which she manages. A revival of the 1982 play written by acclaimed playwright, Caryl Churchill (Far Away, A Number and Escaped Alone).

Caryl Churchill’s feminist masterpiece is given the widescreen production it’s always cried out for... Turner’s care for the text shines through...'
Read more

Lyndsey Turner’s high-spec production...pulls out the stops in terms of cast-size...and visually... but... I felt I’d been watching an absorbing but hardly exhilarating and on-the-button museum piece.'
Read more

Top Girls remains an important, forever relevant and still surprising play, even in a production that doesn't always hit its marks...Turner's new production slightly mutes some of its impact with designer trickery.'
Read more

...much as I love Churchill’s play, a big theatre and an epic cast do it few favours...It’s still a wonderful piece but at times it seems as if we’re watching three separate plays.'
Read more

A work of genius that will never date... Directed by Lyndsey Turner, Top Girls has never seemed more hilarious, or wrenching.'
Read more

Lyndsey Turner’s lavish production could make more of the dreamlike surrealism of this occasion... Crucially, Churchill’s playfulness still comes across, and so does her anger.'
Read more