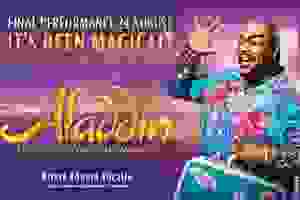 Disney presents the stage adaptation of its animated blockbuster, featuring all the songs from the classic Academy Award-winning film including "Friend Like Me," "A Whole New World," and "Arabian Nights."

Disney’s spectacular musical Aladdin is everything you could wish for and more, and is dazzling audiences daily at the beautiful Prince Edward Theatre, in the heart of London’s West End.

The classic hit film, which became a hugely successful Broadway show, is brought to thrilling life on the stage of the Prince Edward theatre by the producer of The Lion King, featuring all the songs from the Academy Award©-winning score, together with new music written for this production.

The lead roles of Aladdin and Jasmine are being played by rising British star Matthew Croke (Singin' in the Rain:UK Tour ) and Courtney Reed (Broadway's original Jasmine). Broadway’s Trevor Dion Nicholas has made his London stage debut as the Genie.

Matthew, Trevor, and Courtney are joined by Fred Johanson as Jafar, Jermaine Woods as Iago, Irvine Iqbal as the Sultan, Leon Craig as Babkak, Daniel de Bourg as Kassim and Julian Capolei as Omar.

With stunning sets from multi-award-winning designer Bob Crowley and over 350 beautiful costumes from Gregg Barnes (Kinky Boots), Aladdin The Musical UK is an unmissable event in London theatre.

Breathtaking sets, mind-blowing special effects, over 350 lavish costumes and a fabulous cast and orchestra bring the magic of Disney’s Aladdin to life on the West End stage.

Featuring all the songs from the classic Academy Award®-winning film including ‘Friend Like Me’, ‘A Whole New World’ and ‘Arabian Nights’, prepare to experience the unmissable magic carpet ride that is Aladdin.

Disney's Aladdin at the Prince Edward Theatre is the hottest ticket in town. Disney’s Aladdin tickets on sale now!

See it if You want an Arabian night out on à Magic carpet ride with one of the best disney classic !

Don't see it if You hope to see a giant set design, it’s pretty minimal but still entertaining.

See it if You love disney and a classic story! Great staging and band were fabulous! Genie was so entertaining.

Don't see it if You dont like disney. Or if u want it to be exactly the same as the movie.

See it if You want something happy and upbeat. It's fun, family friendly and follows original story line.

Don't see it if You didn't like the movie

See it if you loved the Disney version and want to see it on stage. Wonderfully sung, acted and produced, there's even a flying carpet. Epic show

See it if You love the film and don’t mind a bit of pantomime. Some of the new songs are good too. Children will enjoy it!

Don't see it if You don’t like Disney movies or anything aimed at kids.

See it if Wonderful carpet ride ! Magical . Mystical . Musical . You can’t miss it !

Don't see it if You are not in to enchanting theatre.

See it if You love Disney

Don't see it if No reason, just see it.

“Nicholas' Genie is worth the price of admission in this slightly confused Disney almost-panto...Menken’s musical gives you the same things as a decent British panto ‘Aladdin’...It’s well done, but talk about selling coals to Newcastle: the humour hits the spot with Howard Ashman’s dry lyrics, but it lacks the inspired madness of, say, the Hackney Empire panto. Alongside the other big West End Disney musical, Taymor’s ‘The Lion King’, it struggles to establish a distinct, theatrical identity.”
Read more

“There’s an original score...There’s no audience-participation, dodgy innuendos or slapstick. And we’re in a land of American accents. But at root it does exactly what the British pantomime does – takes an old folk-tale and drapes it in the tinsel of cheery comedy, cutesy romance, colourful designs and lively song and dance routines...For all the visual splendour, spry, yearning-filled lyrics and syrupy sounds, it barely rises above the generic; a cynic’s idea of Disney ‘magic’ at its blandest.”
Read more

“There’s no denying that Disney knows how to deliver quality family entertainment...The resources thrown at the stage here and the sheer sense of spectacle, is awe-inspiring...This is wish-fulfilment and requires a big suspension of disbelief, but the show also has its own distinctive dose of knowing irreverence...Menken’s irresistibly tuneful score is beautifully rendered...A staging that nails every number with brilliant showmanship.”
Read more

“Impressive stage magic, a gold-dripping design and a party-loving genie make this energetic adaptation of the animated movie a wicked treat...I gradually found myself won over by the blend of spectacle, illusion and a greater supply of corn than you will find in the Kansas wheatfields...It is all nonsense but it is done with conviction by Casey Nicholaw, the director and choreographer, who bombards us with business."
Read more

“The sheer bravura of the production papers over all the cracks. It has a kind of delirious silliness that makes you go with the flow, try as hard as you might to resist...The real star of the show is Crowley’s design...There's nothing subtle about any of it, and panto is never far away but there is a lot of mischievous warmth and production numbers that throw everything...into the sheer effort of making everything look, sound and feel as big, brash and all-embracing as possible.”
Read more

“The main reason to see...'Aladdin' can be summed up in three words — Trevor Dion Nicholas...He is show-stealingly brilliant...It is hard to escape the feeling that Aladdin is a pantomime...Nicholaw’s big-budget production is packed with busy numbers, calculated to distract us from such details...Beguelin’s book is puckish and the same goes for the lyrics while Menken’s score is varied and zestful...This is a show with a well-judged air of mischief and spectacle.”
Read more

“You get a lot of show for your money (though, it being a West End musical, you also pay a lot of money for your show). And that seems to be the guiding principle behind the enterprise: lots to ooh and ahh over, lots to whoop at and just generally lots. The first half alone is almost as long as the entire film. It’s not so much ‘Never mind the quality, feel the width’ as ‘The width is the quality’. It’s a show that’s sold by the yard.”
Read more