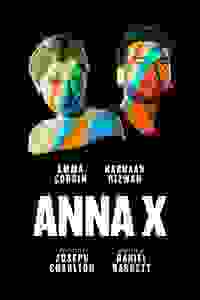 Anna and Ariel are two social climbers who attempt to create online personas to fit in with the social elite of New York. Joseph Charlton's new play about deception, reinvention and persistence transfers to the West End following its successful run at the 2019 Vault Festival. Starring Golden Globe Award-winner, Emma Corrin ("The Crown") and Royal Television Society's 2019 Breakthrough star, Nabhaan Rizwan ("Informer"). The show is part of the Sonia Friedman Productions' RE:EMERGE season of plays which celebrates new voices and diverse talent.

Daniel Raggett directs the hell out of this thing. Legal restrictions are almost certainly the ... reason for ‘Anna X’ not being a ‘proper’ Anna Delvey play. It‘s come on ... since it premiered ... but ... it’s not quite the thing that it wants to be.
Read more

Daniel Raggett’s 80-minute production is cool and ironic...This show is a blast, at the Pinter for a sadly limited run. I really hope it transfers.
Read more

If it looks like a production that is trying very hard to be cool, it must be given full due for succeeding. It’s frenetic, fun and ultra-cool.
Read more

The set and video design are just sensational, a rich tapestry of every changing images that conjure New York life, from its parks, to its offices with a strategically placed Jeff Koons, to the smoking rooms of nightclubs with the city sparkling behind.
Read more

Whatever [Anna X's] onward trajectory, Charlton’s wily examination of self-invention in our fractured digital age is served to the hilt and beyond by a staging from Daniel Raggett that marks out this young director as someone to watch.
Read more

What really impresses and beguiles in Daniel Raggett’s staging is the sheer amount of ground it covers in 80 minutes, the sheer swish with which two people – and a lot of video – summon up a world in which appearances are everything.
Read more

I hope that Joseph Charlton continues to write for the theatre. He has a real feel for what is enigmatic and imponderable in the static-fizzy conundrum of contemporary living, and uses the capabilities of the medium as a way of not editing out the possibilities.
Read more