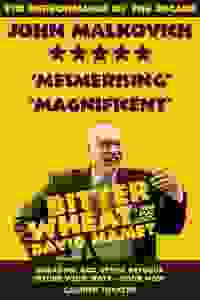 For a play that sets its stall as a black comedy, however, it is no laughing matter - in any sense.
Read more

Malkovich re-affirms his idiosyncratic charm and nonchalant aura. It’s great to see him but he’s not enough to tip the balance fully in the evening’s favour.
Read more

And then he's written Bitter Wheat, which is not really a play at all but an unfocused and tawdry howl of anger which unforgivably wastes the talents of its greatest asset, its leading man John Malkovich.
Read more

That’s not reason enough to see this half-cooked show. Even at its misjudged worst, though, it’s too bizarre to be boring.
Read more

David Mamet’s new play is billed as a dark farce and an attempt to examine the #MeToo movement from an unfamiliar angle. But instead of prompting nuanced discussion, it has the rancid smell of clickbait.
Read more

Flabby, cynical and pointless...Malkovich, a brilliant actor, isn’t brilliant here. He delivers everything in an unceasing monotone, like someone doing some drilling next door.
Read more

Malkovich monologue is more chaff than wheat...the most controversial play of the year is shaping up to be the worst
Read more