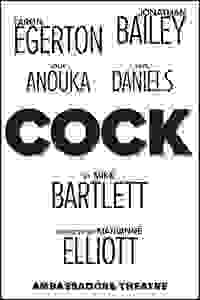 John decides to take a break from his boyfriend, only to meet the girl of his dreams. 'Cock' grapples with identity, sexuality, and relationships.

The play by award-winning English playwright and screenwriter Mike Bartlett first premiered at the Royal Court Theatre in 2009. Bartlett's other notable works include 'King Charles III' and 'The 47th' for the stage and the BBC's 'Doctor Foster' for television.

Three-time Olivier Award-winner Marianne Elliott ('Company', 'The Curious Incident of the Dog in the Night-Time') directs.

Don't see it if Could be a little shorter to make it more fast paced.

Don't see it if You dislike minimalist staging. Could be a bit shorter too.

See it if you’d like an entertaining show that has a massively talented actor playing a massively annoying lead character.

Don't see it if you don’t like shows with aggravating protagonists.

See it if you want to see a very creative and smartly directed 4 person show about sexual preference and identity. Wonderful acting & award worthy dir

Don't see it if you are not comfortable with sexual discussion, or non-nude imagined sex (NOT GRAPHIC), or debate of gender preference. Read more

See it if you feel compelled to.

Don't see it if the star casting means nothing to you. Read more

See it if It had some fantastic acting

Don't see it if A lot of walking in circles, not that funny. just disappointing

See it if you like often amusing, thought provoking and brilliantly acted plays. With a minimalist set that allows the talent of the actors to shine.

Don't see it if You need elaborate staging to be immersed. You can't sit through an interval-less hour and 45 minutes.

See it if you want to be engaged in a well written, acted and directed play. Captivating. Relevant. JB is pure charisma

Don't see it if you are turned off by a play that explores gay sex and relationships. Though, it is so much more. Long, without intermission

Performed with no props, and with many gestures (such as the removal of clothes) implied rather than carried out, ‘Cock’ is funny and playful but with a stark psychological intensity through its minimalism.
Read more

Terrific at conveying hurt, yearning and simmering self-doubt, Egerton now stars in Marianne Elliott’s revival of Mike Bartlett’s 2009 play Cock, a piece smartly and tragicomically about ongoing confusions of sexuality, the suffocating restrictions of categorisation and the agonies of the heart.
Read more

First performed in 2009, Mike Bartlett’s comedy might have seemed edgy then but today it echoes and affirms notions around the slipperiness of sexual labelling.
Read more

It's a play that's easier to admire than to love, but nonetheless a challenging, fascinating contest to witness.
Read more

Despite the best efforts of the cast, the characters always feel primarily like sexual chess pieces engaged in a game in which there can be only one victor.
Read more

You can easily forgive the lack of thematic development when Bailey, Egerton and Anouka ignite the emotional fuel of the story — they really rock.
Read more