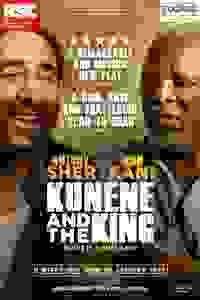 View in admin
Kunene and the King
London: West End
80
Score it Scored!

Kunene and the King London Reviews and Tickets

A compelling exploration of the complex divisions which remain in South Africa 25 years on from the country’s first post-apartheid democratic elections. South African activist, playwright and actor, John Kani (Black Panther, The Island) writes and performs in "Kunene and the King" alongside South African actor, Anthony Sher (King Lear, Death of a Salesman).

See it if you want to get stuck into the aftermath of Apartheid in a very well-written play (even if it rams its point down your throat a bit).

Don't see it if you're upset by the subject matter. Read more

The play is a compelling if cursory exploration of the legacy of Apartheid as expressed through the fast-flowering yet prickly rapport between a dying white South African actor and the elderly black male nurse who comes to tend to him.
Read more

It reduces the struggles of the would-be rainbow nation to an odd-couple double act. It feels like theatre by old people, for old people.
Read more

In other words, it's a play rich in humanity and experience, and it is rewarded by performances that match it note for alternately anguished and uplifting note.
Read more

Kani in particular paints powerfully a picture of a man whose essential goodness and dignity hides a constant anger at all that has happened to him. He is wonderful to watch.
Read more

But what makes the play so absorbing is that Kani draws us into the lives of the two individuals living out their lives in front of us.
Read more

But even if ‘Kunene and the King’ is predictable in its shape and story arc, and feels a mite old-fashioned, it’s a good-hearted 90 minutes.
Read more

A Shakespearean voyage through the legacy of apartheid.
Read more