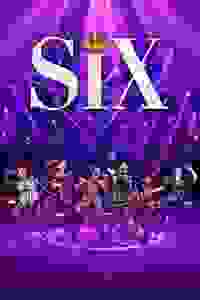 Six Tudor Queens, all wives to Henry VIII, take the mic to remix their infamous marriages into a 75-minute pop concert. 'Six' finds its new permanent home at the Vaudeville Theatre.

A British pop musical which reimagines the six wives of Henry VIII as modern day rock stars. In turn, each wife gives their own account of their lives providing perspectives which may not be included in our history books.

With book, music and lyrics by Toby Marlow ('Hot Gay Time Machine') and Lucy Moss ('Legally Blonde'). This production is recommended for ages 10+.

See it if you love a good time gearing tunes that slap. This is clever and fun and you’ll leave smiling.

Don't see it if you want the vocals to be at the Broadway Six level. The US just has more people, it stands to reason w/a bigger pool we have better singers

See it if you want to enjoy a short, but sweet evening of great and captivating pop music, telling the stories of Henry VIII and his ex wives.

Don't see it if you expect a full length traditional musical- this is staged as a pop concert complete with all the lights and flair you might expect!

See it if you like girl power. 6 Queens in stunning contemporary costumes sing their truth - Great music, sharp & catchy lyrics - history with passion

See it if you love female empowerment

Don't see it if you want a full fledged musical

See it if you like something short and sweet!

See it if you would like to watch a nice, light, fun musical

Don't see it if you do not like musical

Four years on from its Edinburgh Fringe debut, the show still feels like a breath of fresh air. The production is also a true ensemble effort ... You’d need a heart of stone to resist.
Read more

“The challenge for a new cast is to find a way to make the roles their own, something that’s not a problem here. Indeed, no matter how many of the previous casts you’ve seen, this is the line-up you don’t want to miss. The 2023 Queens make SIX feel like an entirely new show”
Read more

I suspect ‘Six’ will be a big hit. But if this is the future of feminism, lop my head off now.
Read more

A rather odd show. The costumes are garish, even comical. The singing is outstanding. But the stories told are not, lacking detail, substance and novelty, leading the songs to focus purely on the frivolous and facetious. Catchy music, funny jokes, but an ultimately forgettable performance.
Read more

There’s undoubtedly raw talent on display in the writing, and really accomplished vocal performances – but it currently feels undernourished and, even though it runs to just 70 minutes, overlong for what it is.
Read more

The songs are insanely catchy, and if subtlety gets gleefully ground beneath the show’s rhinestone-studded stiletto heel, that’s not what anyone came for anyhow. It isn’t profound, but this is a party – and it’s unstoppable.
Read more

It may be cloaked in silliness, but Six makes some serious points about female victimhood and survival.
Read more

This is quite the most uplifting piece of new British musical theatre I have ever had the privilege to watch and the fact that it comes from two 23-year-olds, Toby Marlow and Lucy Moss, who graduated only last year, is even more delightful.
Read more