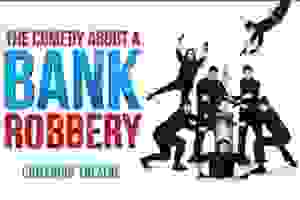 View in admin
The Comedy About a Bank Robbery
London: West End
89
Score it Scored!

The Comedy About a Bank Robbery London Reviews and Tickets

The creators of "The Play That Goes Wrong," Mischief Theatre, present this  fast-paced comedy about a bank heist in 1958 Minneapolis.

The Comedy About a Bank Robbery is presented by Mischief Theatre, the creators of the smash-hit, Olivier Award-winning show The Play That Goes Wrong.

And a snoozing security guard

What could possibly go right?

Book now for the hottest ticket* in town!

It would be criminal to miss it.

*Beware, pickpockets are known to operate in this area!

See it if You love ridiculous over-the-top crazy comedy.

Don't see it if You are looking for a comedy with a story. This is definitely a straight up farce Read more

See it if you enjoy silliness with a Minnesota USA accent. Great performances. An enjoyable evening. Went to London only to be taken home.

Don't see it if you need depth. This was silly fun.

See it if You enjoy silly people acting silly, your kind of comedy is in absurdity, and you don't care too much about story

Don't see it if Honestly, if slapstick isn't for you, all the jokes will fall flat.

See it if you like absurd farcical comedy. Funny word plays and incredible stunts rarely seen live on stage.

Don't see it if you don't like Monty Python humour. This is relatively similar, with absurd situations and ridiculous dialogs at times (funny if like it) Read more

See it if If you like silly slapstick and farce with really clever writing!

Don't see it if You don't like the above. But try it anyway - it's bound to make you laugh!

See it if This was my first "Goes Wrong" show and started my addiction. Great slapstick humour, fast paced, perfect timing and hilarious. I loved it

Don't see it if You don't like slapstick humour it's not for you.

See it if You're looking for a fun night out - it's very funny, with superb split second coming timing from the cast.

Don't see it if You're not a fan of farce or slapstick comedy.

See it if This is Mischief Theatres crowning glory! It is extremely well done!

Don't see it if You don't like slapstick comedy

“This is the funniest show in town...The jokes, visual and verbal, are piled skyscraper-high. Many are as corny as can be but there’s such youthful relish to the playing and so much surrounding theatrical invention that even the hoariest gag earns its keep. With slick direction...you not only want to know what’s going to happen next, but how...You keep thinking this is as good as it gets – then it gets better...It deliver swag-loads of pleasure and thoroughly deserve to make a mint.”
Read more

"It’s an entirely original, yet also entirely borrowed, stage comedy that is inherently theatrical yet pays explicit homage to B-movie bank robbery capers...The trust in each other and rapport of the troupe propels them to new feats of physical daring, and exquisite comic timing. There are times when the comedy threatens to become over-indulgent...It’s a show that will have you on the edge of your seat: you’ll be rocked by laughter, then held in suspense as they pull off another nail-biting effect.”
Read more

“The funniest flat-out comedy since ‘One Man, Two Guv’nors’...This spoof 1950s crime caper is outrageously well-executed...Delivered with a ruthless devotion to getting to the joke...Bell and the company’s theatrical feast of a production use every technique going to keep this feeling home-made yet surprising and spectacular...The sour ending is more loyal to the spirit of noir than it is to the daftness elsewhere. Yet laughs this plentiful and this good are rare indeed. A joyful night out.”
Read more

“This new show has also gone wrong although not intentionally...An under-funny farce dotted with some decent set pieces that are oddly unconnected to the rest of the action...The first half of Bell’s production is laboured set-up; the second sees some slightly more fruitful mayhem in the bank. There are nods to various heist movies, but it would be so much more effective if things could go wrong around a tightly coiled narrative, instead of the grab-bag of styles and references here.”
Read more

“It’s a rare occasion when three seconds pass without a gag of some description. However, this isn’t an unambiguous plus point...This is a show that does not merely go through funny and out the other side, but right round in curved space and back into funny again. It’s the range of comic ideas that is so undeniably impressive: verbal, physical, visual, and ranging from classical to postmodern in style...It all adds up to one of those cheerfully defiant shows that refuse to let you not like it.”
Read more

“A farce that requires some very complicated comedy staging and acting to go exactly right. It does...The show is thrillingly and daringly inventive...In a gymnastically enthusiastic cast that combines Mischief long-timers with newcomers, Lewis is outstanding...The sillier stretches of dialogue leave the show just short of ‘One Man two Guvnors’...This lung-bustingly funny play is just what the therapist ordered.”
Read more

“Mischief Theatre’s best and funniest work yet. A genre pastiche, screwball comedy, and classic farce that’s as clean and clear as its brassy branding, it spins with a manic energy from Two Ronnies-esque wordplay through surreal set-pieces to slapstick stunts prepped to bring the house down...The entire cast is bang on the money...The best new comedy to open straight onto the West End in decades.”
Read more