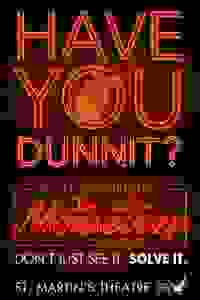 Agatha Christie's mystery drama has been entertaining audiences for a record-breaking 70 years.

Seven strangers find that they are stranded in Monkswell Manor due to a blizzard. A police sergeant pays an unexpected visit and the guests soon discover that there is a murderer in their midst. But who is it?

A classic 'whodunnit' tale which began its life as a short radio play that aired in 1947. The production was originally performed in London's West End in 1952 and is celebrated as the world's longest-running play.

Acclaimed playwright Agatha Christie ('Witness for the Prosecution') is best known for her 66 detective novels and 14 short story collections. Directed by Ian Talbot O.B.E. This production is recommended for ages 7+.

See it if you want to be able to say you saw The Mousetrap.

Don't see it if you don’t wanted to watch something kind of dated that’s a little slow and only somewhat entertaining. Good actors but the material is blanf

See it if u enjoy well-made mysteries. They r rare & hard to do well in a theatre.

Don't see it if I've voluntarily seen this production 5x over 35 years, but the level of acting has dimished to that of an overacted carnival ride. Sad. Read more

See it if you want to enjoy a part of theatrical history and be entertained by a wonderful group of actors.

Don't see it if you want a fast paced, current new play.

See it if you want to see the quintessential whodunnit, live on stage, and try your hand at solving the mystery for yourself!

Don't see it if you're not a fan of relatively slow to unravel murder mysteries or Agatha Christie generally.

See it if You love mysteries. The play may not be as novel as it once was, but there's still a lot of fun to be had.

Don't see it if Parts of the play, due to the nature of Whodunnits, can be slow. If you need constant excitement or laughs, this isn't the show for you Read more

See it if a classic who's done is evokes joy. It’s fun to try to solve.

Don't see it if don't like who's done it mysteries.

See it if you want to see the longest running play in the world! Whodunnit with some swerves.

Don't see it if old fashioned UK in the 1950s whodunnit plays are not your preference.

See it if you love a mystery

Don't see it if you don't like old fashioned references

“The eight-strong cast, as well as the director, changes regularly and if ‘fresh’ might be something of a stretch, the first half of Ross’s production is certainly spritely enough, as it sets in motion what looks to be a briskly efficient country house murder mystery...Unfortunately the second half gets increasingly creaky before a highly unconvincing, not to mention oddly peremptory ending. The cast play their roles, which are largely character types, with precision."
Read more

“’The Mousetrap’ provides what a theatre museum cannot...A piece of stage life lifted wholesale from the past, a piece that carries the DNA of the first performance, that has not been re-created but continuously re-enacted. Some of what is seen is the stuffiness that gives the overmaligned 50s a bad name...What makes it still enjoyable, for all the creaks, are Christie's puzzle plotting, the soothing certainty of resolution, and one surprise that is never mentioned.”
Read more

How has this English country-house whodunnit lasted? By telling a clear yarn with a twist. Politics is absent. Not a single swear word. A solid set. No damn puppets.
Read more

“The real mystery...is not whodunit but, in its currently mediocre state, whydoit at all...This is a walking, talking piece of theatre history and the most expensive museum exhibit in London...A thin and campy shadow of its former self, whose creaks arise from cliché not suspense. Christie's best thrillers have a psychological conviction and a subtle sense of evil that the current cast shelve in favour of xenophobic exaggeration or dullness."
Read more

“Those familiar with the Christie canon will find it easy to spot the murderer among this roll-call but this is not the only point of seeing the production. This is a beautifully preserved example of a country house murder mystery, a throwback to theatre going in the thirties. And should a disgruntled cab-driver tell you whodunnit there are several other moments of suspense and surprise in store to keep you guessing...An entertaining night out.”
Read more