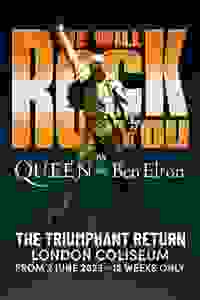 View in admin
We Will Rock You (West End)
London: West End
Buy tickets from £30 on TodayTix
Score it

We Will Rock You (West End) London Reviews and Tickets

Set in a globally corporate world 300 years in the future, the sinister Killer Queen, who has banned all non-computer-generated music, discovers a prophecy that musical instruments have been hidden on the planet and that ‘The Dreamer’ will emerge to find them. Meanwhile, a young maverick named Galileo is desperate to end the tyranny of this corporate world. He hears lyrics in his dreams and is heralded as ‘The Dreamer’ by the Bohemians who have been searching for the lost instruments. To fulfill the prophecy, Galileo must evade the clutches of the Killer Queen and finally bring back the music.

Featuring 24 of Queen’s top hits, including 'Bohemian Rhapsody', 'We Are The Champions', 'Don’t Stop Me Now' and 'Radio Ga Ga', 'We Will Rock You' returns to London for the first time since the show completed its historic 11-year run at the Dominion Theatre in 2014.