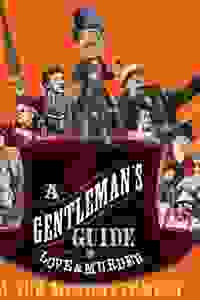 A Gentleman’s Guide To Love & Murder NYC Reviews and Tickets

Recipient of the Tony Award for Best Musical, about a charming scoundrel with noble aspirations and the eight relatives who stand in his way (all played by the same person).

"Gentleman's Guide" tells the uproarious story of Monty Navarro, an heir to a family fortune who sets out to jump the line of succession by—you guessed it—eliminating the eight pesky relatives who stand in his way (each played by Tony winner Jefferson Mays in what The New York Times calls “the year’s greatest musical theater performance"). All the while, Monty has to juggle his mistress (she’s after more than just love), his fiancée (she’s his cousin but who’s keeping track?), and the constant threat of landing behind bars! Of course, it will all be worth it if he can slay his way to his inheritance… and be done in time for tea.

See it if great classic. Funny and witty. Totally entertaining.

Don't see it if you don't like capers and British humor.

See it if You like british humor and slapstick comedy.

Don't see it if You dislike british humor.

See it if you love a great musical with great singing, dancing, acting and staging. the two and a half hours flew by! One of my favorite musicals!

Don't see it if You do not like a great musical with humor, great plot and hilarious at times It is fasted paced so if you have trouble keeping up with plot

Don't see it if you want a short evening; Act I was long (the early exposition wasn't great). If you hate G&S you probably sh stay away. All others sh go! Read more

See it if want a new-yet old-timey show that's great!

Don't see it if you want big dramatic numbers. This is light.

See it if silly plays with absurd over the top concepts amuse you.The central character is tour de force opportunity for a comic actor.

Don't see it if the title leads you to expect nonstop hilarity. There's more potential than delivery.

See it if You really enjoy farce.

Don't see it if You think just because it won Best Musical that it has to be terrific.

See it if you like classic Broadway, fantastic performances and singing, and great costumes.

Don't see it if you don't like shows with a classic Broadway vibe.

"A true tour de force that is hardly likely to be bettered on Broadway this season...Despite the high body count, this delightful show will lift the hearts of all those who’ve been pining for what sometimes seems a lost art form: musicals that match streams of memorable melody with fizzily witty turns of phrase."
Read more

"Since it turns on the niceties of aristocratic succession, why not start the coronation early: A Gentleman’s Guide to Love and Murder is the new undisputed king of musical comedy. Filled with lunatic sightgags and the wittiest, loveliest show tunes in years, there’s not a weak link in the lively cast."
Read more

"The authors of the musical A Gentleman’s Guide to Love and Murder are aiming for droll comedy; especially in the knock-’em-dead performance of Jefferson Mays as various undearly departeds, they usually hit their mark."
Read more

"The show embraces a full spectrum of moth-eaten British comic archetypes, not least of them the frightfully plummy Adelbert, togged out in upper-crust hunting gear, his big number backed by the singing portraits of deceased forebears. Also unmistakably English is the musical’s judicious smattering of bawdy humor and double entendres."
Read more

Overkill has seldom been more enjoyable than in A Gentleman's Guide, a thoroughly delightful and uproarious Broadway musical about an Edwardian serial killer who could be a well-heeled cousin of Sweeney Todd by way of P.G. Wodehouse’s Jeeves."
Read more

"Witty and adorably wicked...the show’s heart is in the old music halls, where the jokes were vulgar, the songs were upbeat, the lyrics were in bad taste, and the thespians often got away with…well, murder."
Read more

"The big hook of the musical “A Gentleman’s Guide to Love & Murder” is Jefferson Mays. He doesn’t just give a performance — he gives eight of them, impersonating members of the same British family. And yet none of them really register."
Read more

"An unforgiving theater fact: A musical can have everything else going for it, but without a great score it’s got a hole in its heart. Case in point — the fun but flawed “A Gentleman’s Guide to Love & Murder.”
Read more