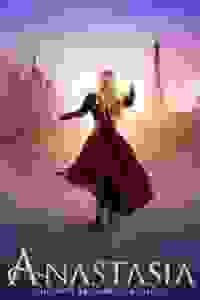 Inspired by the Anastasia legend and two movies—including the 1997 animated film—this new musical is the romantic, adventure-filled story of a brave young woman attempting to uncover her past.

From the Tony-winning creators of 'Ragtime,' this musical journeys from the twilight of the Russian Empire to the euphoria of Paris in the 1920s as Anya sets out to unlock the mystery of who she is and where she came from. Pursued by a ruthless Soviet officer determined to silence her, Anya enlists the aid of a dashing conman and a lovable ex-aristocrat. Together, they embark on an epic adventure to help her find home, love, and family. Directed by Tony winner Darko Tresnjak.

Don't see it if you want content as gd as production values. Romance is forced. Villain's scenes the worst. Still, I was entertained (I went as a guest).

See it if You want to see a visually stunning piece of work, lush, grand and beautiful to look at. Great story. Nice to listen to but forgotten quick.

Don't see it if You're going to be super critical. It's a nice show. It's not going to be a classic but it's much better than the reviews led me to believe.

See it if you like to see a new "old-style" musical with wonderful sets, good singing & choreography by a strong cast in a "historical" story.

Don't see it if you want a musical with a lot of memorable tunes. It is a long show and drags just a bit.

See it if You want a high quality show wiith great performances. My seats were partial view, so I missed a lot of the projections. BUt still enjoyed.

Don't see it if It's fairly traditional with some high tech staging. It's really good. I can;t think of why not to see it. You didn't like the movie?

See it if Tame, sentimental, glittery show that had the many teenage girls in the audience in tears.

Don't see it if You are looking for deeper story and characters. You prefer more interesting music.

Don't see it if your principal interest is music. The chorus blurs their words but the solo songs were not interesting enough to make me think I missed much

See it if My 90 and partner's 95. Did not expect much but so pleased.. 6 leads had great voices. Spectacle.The videos,lights and sets were dead on.

"The amnesiac title character of 'Anastasia' isn’t alone in suffering a serious identity crisis. The postcard-scenic show that bears her name has its own troubling case of multiple personality disorder...The show in which she appears trembles nonstop with internal conflicts during its drawn-out two-and-a-half hours...The cartoon version from 1997 is very fondly remembered by people who saw it as tweens...Those without such nostalgic insulation are likely to find this 'Anastasia' a chore."
Read more

"The happiest surprise is how consistently good the musical turns out to be. Smartly adapted by Terrence McNally from the 1997 animated film...with Stephen Flaherty and Lynn Ahrens impressively expanding their score...'Anastasia' is a sweeping adventure, romance and historical epic whose fine craftsmanship will satisfy musical-theater fans beyond the show’s ideal audience of teenage girls...'Anastasia' is the richest and fullest family show to hit Broadway in years."
Read more

"There’s something soothing (in the wrong way) about the team’s ability to follow all the templates of normal musical-making even while writing about something so abnormal...A score of singular characterlessness. McNally’s book, its structural improvements notwithstanding, is similarly bland...Tresnjak’s tonally schizophrenic staging only makes things worse...It bewilders me that in making stage musicals from animated movies, adapters seem to think they can remain outside history."
Read more

"In Tresnjak’s production, everything is incredibly overblown, from the screensaver-like cityscape projections to the score, by Flaherty and Ahrens, who never met a pop ballad that they couldn’t top off with a sweeping high note...Historical license doesn’t quite cover the liberties taken, and in this riches-to-rags-to-riches tale there’s a great deal of romantic nostalgia for imperial Russia...If you bring a small child, you might get some thorny questions about the October Revolution."
Read more

"The show as a whole is a tad bland, though it’s beautifully staged...There's a workmanlike feel to the musical's construction. Lack of nuance in the writing makes the three leads, while vocally strong, quite vanilla...But Tresnjak elevates the material...It's kitschy, old-fashioned entertainment given a relatively sophisticated presentation, and you have to acknowledge its success when you hear the target demographic swoon on cue."
Read more

"A fidget-inducing, two-and-a-half-hour Broadway musical, with a production not nearly animated enough to warrant that running time...Peil and her gregarious lady-in-waiting, Countess Lily prove to be the most dynamic performers of the bunch. Altomare and Klena fall flat, lacking the charisma needed to fill the slog...Fans of the film will find some joy in the score...Director Tresnjak caters to his young audience with a healthy—perhaps too healthy—dose of superfluous ensemble sequences."
Read more

"A sumptuous fairy tale of a musical that should please the kids, satisfy the sentimental and comfort those who thought the old templates for musical comedy were passé. The broad strokes of the familiar—a romantic young couple, a villain in hot pursuit, comic supporting characters—can still be irresistible when combined with taste, craftsmanship and a willing suspension of disbelief. Director Tresnjak, together with much of that first-class design team, weave an enchanting spell."
Read more

“The musical’s various elements are so finely fitted and its cast so accomplished that all comparison is quickly left behind. It is intelligent, well-crafted, often exhilarating…A great deal of the credit must go to the book by McNally…Altomare is wondrous as Anya…Her voice is luminous and powerful and clear…In the expansion of their film score, Mr. Flaherty and Ms. Ahrens have created something much more coherent and comprehensive while keeping its highlights.”
Read more