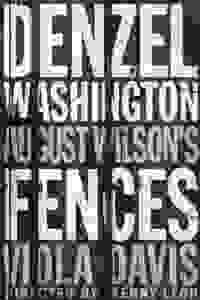 This revival of the most celebrated play in August Wilson’s cycle, starred Viola Davis and Denzel Washington.

‘Fences’ centers on the Maxons, an African-American family living in Pittsburgh in 1957. Patriarch Troy, a sanitation worker, is an embittered former player in baseball’s Negro Leagues. Matriarch Rose runs the household, stretching Troy’s meager paycheck to keep things going. Their teen son Cory is being recruited to play college football, a source of contention with his father. Also on the scene are Troy’s older son Lyons, brain-damaged brother Gabriel and drinking buddy Bono. The main action of the play takes places over a two-month period that changes the nature of the Maxons’ marriage and Cory’s path in life forever.

See it if You're an avid August Wilson fan, whether or not you've seen a production of Fences before.

Don't see it if You really dislike Denzel in any film/play he's starred in.

See it if Wonderful. Moving. Every performance was exquisite.

Don't see it if Kick yourself if you missed this one.

See it if tremendous acting to one of August Wilson best plays.

Don't see it if you don't like seeing plays about the African-American experience, you may want to skip this play.

See it if a revival is done. Don't miss the picture

Don't see it if Not applicable Read more

See it if On stage a play's dominated by the metaphor that is the set, but in films the actors take precedence & this is a duo 4the ages: Denzel/Viola

Don't see it if I guess if U R a racist U should stay away from all-black-cast plays. Y watch a show that will make U uncomfortable? No lynchin's here massa

See it if You are a fan of great writing by August Wilson, as he explores Africa-American and masculinity themes.

Don't see it if Some of the lines seemed rushed in the production I saw but the overall power of Wilson's words still came through.

See it if you care about great writing. August Wilson is a master playwright whose works speak beautifully to the human condition.

Don't see it if you don't like long plays that are mostly talk with little action.

See it if you are a fan of August Wilson, as this is, arguably, the best of the 9-play cycle.

Don't see it if you aren't a fan of American theater. This is as pure and good as it gets.