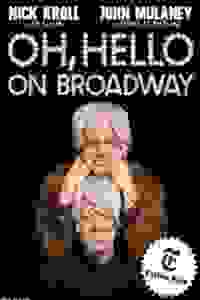 Comedians Nick Kroll and John Mulaney channel their beloved, 70-something alter egos known for their turtlenecks, misinformed beliefs, and tendency to say "Oh, hello!" This Off-Broadway hit transfers to the Main Stem.

Kroll and Mulaney developed Faizon and Geegland after spying two men wearing turtlenecks and blazers at The Strand bookstore purchase separate copies of an Alan Alda book. They followed the men into a coffee shop to observe them, and soon decided to host a comedy show as these unwittingly hilarious eccentrics. After years of playing the characters on the road and Off-Broadway, they bring these two bachelors back to their NYC roots under the direction of Tony nominee Alex Timbers.

Don't see it if You prefer your humor witty and subtle. Don't want your jokes explained to you. 40% NY jokes. Material is Ok. Not great.

See it if You are a fan of Kroll & Mulany or these characters. There are some genuine laughs and fun moments. Lots of fun NY references

Don't see it if You aren't familiar with them the schtick may get tired. Comes off as feature length SNL sketch, funny moments but I'd prefer the highlights

See it if you love theater-insider humor. George and Gil can be wearing, but also hilarious. The one-sided phone call is a highlight.

Don't see it if you want plot or even consistent characters. Even when G&G annoy, you root for them. Q: What does the theater do w all that leftover tuna?

See it if You're already a Kroll & Mulaney fan (and their Faizon & St Geegland alter egos); you're from NYC & a theater fan. (Lots of inside jokes!)

Don't see it if you're not prepared to just relax & laugh at an unpretentious, simplistic (but clever) show that pokes fun at "quintessential New Yorkers".

Don't see it if Trigger warning - magnificently politically incorrect otherwise go & trip out.- unless you have an aversion to tuna fish .... or Steely Dan

Don't see it if though not a play per se and frequently sophomoric, go with the flow: skits/improv are funny/entertaining as hell

See it if you want to see the most bros packed into one Broadway theater that you'll ever see.

Don't see it if you aren't interested in a SNL-esque sketch stretched out to 100 minutes (done very well, but, still).

See it if You like these actors and want to see the show. If was mildly amusing. The best part was when an audience member was brought up on stage!

Don't see it if I was disappointed given the hype. It just wasn't particularly amusing. And the jokes were repeated over and over.

"Stupendously entertaining...There are lots of bad puns on tuna and even more jokes that qualify as politically incorrect...Consider that as a trigger warning, if you must, but I find it hard to imagine anyone’s taking offense. That’s because, like most good theater, 'Oh, Hello' exhales the transporting joy of actors becoming someone else so completely and infectiously that on some level we become them as well and adopt whatever warped worldview they’re selling us."
Read more

"'Oh, Hello on Broadway,' directed by goofy-smart prince Alex Timbers, stretches the shtick to 95 minutes of metatheatrical horseplay...The internal logic gets foggy, but 'Oh, Hello' is really about watching Kroll and Mulaney do high-level tag-team comedy, in the great tradition of Mike Nichols and Elaine May and Mel Brooks and Carl Reiner. If some of the tuna seems a bit canned, both comedians are superb improvisers...They make mustiness new, and they’re a New York City must."
Read more

"The jokes are excellent...It’s the kind of nonsensical set-up that leaves the writers maximum latitude as to what they can build, but it also limits how strongly they can build it. The result is both delightful and shaggy, pointed and unmemorable. Most of the delight and pointedness come from the exemplary verbal polish of the scripted material...The 90-minute evening is already a mite too long, and if it weren’t for a few stand-alone bits, 'Oh, Hello' might be too soggy to enjoy."
Read more

"The funniest show in town...Don't go looking for much of a plot in this stand-up comedy routine dressed up as theater...The evening is structurally ragged, composed of tenuously related blackout sketches, improvised bits, and an interview segment featuring a different special guest at every show...Not all the jokes land...The show could use some pruning. But it hardly matters when the jokes come this fast and furious."
Read more

"Kroll and Mulaney wrote the script, in addition to starring, and they’re very funny performers. Their show is less funny, unfortunately, unless you’re already a dedicated fan...The script is full of genuine laughs...The play is directed by the playful and inventive Alex Timbers, who keeps the business humming along nicely...The entire effort feels surprisingly unambitious, with no real story, no attempt to welcome new audiences, no truly great comic moments. It’s a sketch, drawn out."
Read more

"Sloppy, silly, occasionally inspired...'Oh, Hello' might not be the show to win over new enthusiasts...There’s no defining theme to the show, and the humor is all over the map. The core component of their act is pure character comedy...Is the material of this show really that uneven, or is the production still evolving? With the duo’s improv skills and their packed houses, 'Oh, Hello' could develop into a production format that would be all its own—and genuinely original."
Read more

“The less said, the better. A hoary vaudeville masterminded and performed by Nick Kroll and John Mulaney, their Upper West Side alter kockers have ’em rolling in the aisles of the Lyceum Theatre with politically incorrect jokes, interspecies copulation, Norm Crosby-style malapropisms, idiosyncratic mispronunciations, and a tuna sandwich that would do the soon-to-be-departed Carnegie Deli proud. The whole thing is exceedingly idiotic or possibly just too cool for me.”
Read more

"Their unlikely showbiz ascension is exactly the outcome we deserve — those of us who don’t mind a few lung-punishing laughing jags of an evening, in the theater...Comedians John Mulaney and Nick Kroll hold a theater crowd in their loony spell for a giddy, galloping 90 minutes...Their brand of comedy is a winning melange of all the brows: low, middle and high...Terrific bits of observational comedy — and more successful, I think, than an interlude halfway through."
Read more