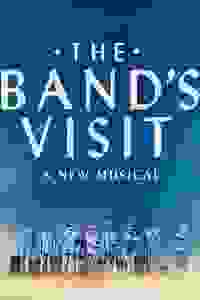 Based on the film of the same name, Atlantic Theater Company's critically acclaimed musical by songwriter David Yazbek was the winner of ten 2018 Tony Awards, including Best Musical.

The Egyptian Alexandria Ceremonial Police Band arrives in Israel to play at the opening of a cultural center. When their hosts don't show, a miscommunication sends them in the wrong direction and they find themselves in a small settlement in the heart of the Negev Desert. With no transportation out until morning and no hotel in sight, the beleaguered band members are taken in by locals. Under the spell of the desert sky, their lives become intertwined in the most unexpected ways.

See it if If you like Middle Eastern plays. It was great at certain points and slow at others. 90 minutes, no intermission. Tony Shaloub was great.

Don't see it if if you do not a play about cultural differences the dealings with the middle east or anything of relevance to this kind of genre.Slow moving

See it if you enjoy a thinking-person's musical. Surprises include a breakout song of an unnamed character, emotions expressed and singing highlights.

Don't see it if you want a big, splashy musical with tv and movie stars and bright sets. This is a charming story with music that enhances the plot.

See it if While I appreciate a differently toned musical, I found this boring, a struggle to endure and of little value. My wife disagrees entirely.

Don't see it if I cannot recommend this show, unless you can get free tickets. Even then...oi!

Don't see it if you expect a big Broadway musical, no dancing, no sequins, no bright colors.

See it if People meeting and forming friendships base on the person. The music is excellent.

Don't see it if If you want a dancing, and shine stage.

See it if you'd like to see a simple, wistful, heartfelt musical that in the end upholds the simple virtues of reciprocal kindness & generosity.

Don't see it if you are looking to be shaken from your groundless belief in the basic goodness of humanity. Read more

See it if Reaching across the cultural/religious divide, an original musical adaptation of the film affects and haunts. A respite from headline noise.

Don't see it if Whatever your convictions of the topic, it might be best to absorb and to allow the humanity to unfold. Ethnic music on Broadway is a risk.

See it if It’s wondeful. Just see it.

Don't see it if You hate musicals. Although this is very unique. Not your usual musical. I’d say see it (if you can get a ticket!). Read more

"One of the most ravishing musicals you will ever be seduced by...A Broadway rarity seldom found these days outside of the canon of Stephen Sondheim: an honest-to-God musical for grown-ups...Directed by David Cromer with an inspired inventiveness that never calls attention to itself, 'The Band’s Visit' flows with the grave and joyful insistence of life itself...Close to perfect musically...A miraculous show."
Read more

"'The Band’s Visit,' which feels even richer on Broadway, is unconventionally wise. It is rare to encounter a show that has such a graceful sense of time...Moses’s book embraces the unspoken...Yazbek’s score includes not only wryly witty character songs but also joyous instrumentals...Directed with David Cromer with an unblinking eye, the other actors sketch memorable portraits...Bittersweet and built for adults."
Read more

"Remains quietly ravishing...Sasson Gabay now stars as Tewfiq...His performance is bone-dry and bone-deep, and his scenes with the stunning Katrina Lenk retain the delicate balance she had opposite Tony Shalhoub, with a slight shift in emphasis: Gabay has a more somber and paternal presence...The richness of the writing, the nuances of David Cromer’s production and the continued excellence of the ensemble cast make each return visit a pleasure."
Read more

"Cromer, Moses, and Yazbek are clearly unified in their pursuit of the specific and the humane over the grandiose...A play of deep integrity — funny, generous, sweet without sentimentality, poignant without melodrama, and emotionally expansive even as it insists upon its own smallness...'The Band’s Visit' is quietly modeling real theatrical and musical courage. Its sound—dense and atmospheric and drawn from a non-Western musical idiom—is utterly distinctive on Broadway."
Read more

"Such minimalist material requires tremendous trust and patience, and Cromer has both, letting the story’s emotional music find its way to the surface...Plot-wise, 'The Band’s Visit' is a show about nothing, but it fills the stage with feeling—the muted kind that dwells in missed connections...'The Band’s Visit' doesn’t quite shake its cinematic roots but it succeeds on the strength of its cast and creators, who know exactly what, and when, to hold back."
Read more

"It transfers to Broadway with its delicate alchemy intact, borne aloft by the intoxicating Middle-Eastern rhythms of David Yazbek's original score and by the soulful performances of an exemplary ensemble...None of the hushed intimacy, the subtlety or nuance of this narratively spare piece has been lost...The entire ensemble is attuned to the show's quiet observations, and its unusual, funny-sad sensibility."
Read more

"Everything is elevated by Yazbek’s haunting music and deadpan lyrics that perfectly capture the Israeli humor...Probably better described as charming than life-altering, but its scale reinforces the moral themes of the musical itself...It’s a quiet, beautiful thing 'The Band’s Visit' does, and while I wished there had been more something — more emotional payoff, or catharsis — I also recognize that that’s sort of the point."
Read more

"The set’s a bit grander and the music sounds richer, but success hasn’t spoiled this embraceable musical fable...Broadway theatergoers looking for something off-the-beaten-musical-track should be charmed by this unassuming show...This disarming musical has the emotional depth that holds up to repeated viewings and the offbeat charm that could make it a cult hit."
Read more