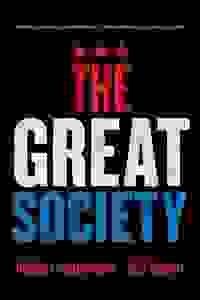 View in admin
The Great Society
NYC: Upper W Side
74
Score it Scored!

Emmy winner Brian Cox stars as Lyndon B. Johnson in this companion piece to the Tony-winning "All The Way," which depicts the tumultuous times that led to the conclusion of the Johnson presidency.

See it if you like history plays. TGS boasts a huge cast & clever staging. All the Way ends w a win; TGS w a loss. Focus on Vietnam, civil rts, power.

See it if you like American history, want to know more about LBJ or follow up "All the Way," fan of Brian Cox, recall that period or lived through it

Don't see it if you don't like hectic history, characters not given chance to develop, too many events off stage, don't care about that time period

See it if You love talky plays about history and politics that give you an “inside baseball” look at an historical figure & political decision-making.

Don't see it if You feel like you’ve had your fill of plays/movies about Selma and Vietnam. There’s not much new to learn here.

See it if you’re into political dramas, especially those reflecting the seminal events of the ‘60s.

Don't see it if you’re not interested in politics, or might get confused by several dozen characters portraying several events at once. This is a BIG piece.

See it if you're a history buff &/or a student of the Johnson years; good technical direction; you want a refresher course for the years 1964-1968.

Don't see it if overstuffed; actors wasted with little insight into their characters; where are Johnson's southern accent & mannerisms, what was he feeling? Read more

See it if You are interested in LBJ, the events during the Vietnam War, and the beginning of the Civil Rights Era. As a Baby Boomer I enjoyed it.

Don't see it if You dislike political plays, and have no interest to learn about the U. S. struggles in the 1960’s to set the world straight. Read more

"In ‘The Great Society,’ Another Presidential Nightmare: Brian Cox plays Lyndon B. Johnson at the height of his powers, when history decided to bring him down."
Read more

"The Great-Man Theory of 'The Great Society'"
Read more

"Brian Cox stars as Lyndon Baines Johnson in the continuation of playwright Robert Schenkkan's sprawling account of the tumultuous 36th U.S. presidency that began with 'All the Way.'"
Read more

Grade: B "Lyndon Johnson gets another term on Broadway, with Brian Cox in 'The Great Society'"
Read more

"A Most Complicated History: Playwright Robert Schenkkan sees his play as ‘the origin story for our present political crisis.’ Luckily, the drama is more nuanced than that."
Read more